Kick-’em-Jenny, located approximately 8 km north of Grenada  (12.18°N, 61.38°W), is the only known ‘live’ submarine volcano in the Eastern Caribbean. This location is in the southern part of the Grenadine Islands, which are themselves in the southern region of the Lesser Antilles island arc. It is the most frequently active volcano in the Eastern Caribbean, erupting at least 14 times since 1939. The volcano should not be confused with the nearby Diamond Rock, which is also called ‘Kick ’em Jenny’ on some charts. It stands roughly 1300 m high and 300 m wide at its summit (highest point of the volcano), which is currently thought to be about 197 m below the surface of the sea. 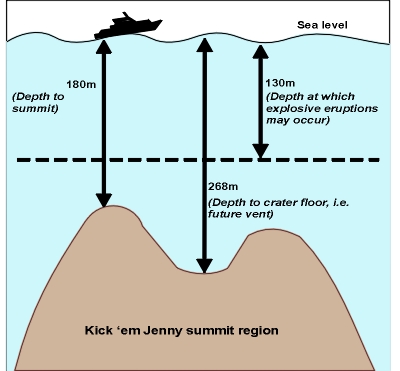 The volcano is currently considered to be too deep beneath the surface of the sea to generate a tsunami.

Kick-‘em-Jenny first revealed its presence in the historic period in 1939.  Numerous earthquakes were felt, and high waves affected Grenada, the Grenadines, and as far east as Barbados, when an explosive eruption broke the surface of the sea and produced sub-aerial, ash-laden columns that reached 300 m above sea level. Other historical eruptions have breached the surface producing steam and ash-laden plumes and minor waves.  The most recent eruption of Kick-’em-Jenny occurred in April 2017 with an instrumentally recorded unrest period in 2018. 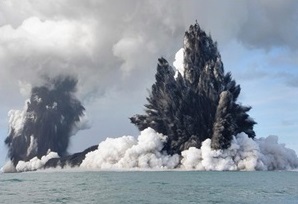 Submarine volcanic eruption off the coast of Tonga in the Pacific Ocean (March 2009). Similar activity may have occurred during the 1939 eruption of Kick-’em-Jenny. The volcano is currently too deep beneath the surface for this type of activity to occur.

Currently, Kick-‘em-Jenny’s summit is 197 m below sea level and the diameter of the crater is 300 m.  Between the 1960’s and the late 1970’s the depth to the summit of the volcano was approximately 180-190 m. In the 1970’s and early 1980’s the depth to the summit of the volcano decreased to approximately 150 m, reflecting the growth of a dome within the crater. This dome was destroyed during eruptions in the late 1980’s and a survey conducted by the U.S.-based National Oceanic and Atmospheric Administration (NOAA) in March, 2002 revealed that the summit was 180 m below the surface of the sea. It was once thought that Kick-’em-Jenny had grown 46 m (from 236  m to 190 m below sea level) between the surveys of 1962 and 1966. However, data collected from two cruises (March 2002 and March 2003) and a careful re-examination of data collected on even earlier cruises made it clear that the crater rim of Kick-’em-Jenny had remained at the same depth below the surface (180-190 m, within measurement uncertainty) since at least 1966. The major sequence of changes over the past 40 years has been that a dome grew in the crater between 1976 and 1978. This dome collapsed in either 1988 or 1990 and there is now no remaining trace. There is in fact a new interior crater about 30 m deep on the site where the dome used to be, so it is more accurate to say that the active vent area of Kick-’em-Jenny has in fact become deeper.

During the March 2003 NOAA research cruise over Kick-‘em-Jenny scientists discovered numerous steam vents within the crater that may have temperatures of up to 150˚C. The presence of zones of hot water within the crater was also suggested in 1989, when a manned research submersible experienced a problem during a dive on Kick-‘em-Jenny. As the submersible passed over the crater rim and into the open crater, it entered a zone of sudden updraft and the craft was rapidly lifted towards the surface. The pilot claimed he thought they had encountered a pool or column of warmer water and the updraft carried them towards the surface.

Although geothermal vents have been observed, harnessing the energy at the volcano will be unlikely as it is underwater.

30 Years in the Life of an Active Submarine Volcano: A Time‐Lapse Bathymetry Study of the Kick‐’em‐Jenny Volcano, Lesser Antilles (Allen et al., 2018)