Volcanic eruptions can drastically impact our lives. They can affect the property we own, the land upon which we live, the water we drink and even the air we breathe. In serious cases, people may have to leave their homes and move to safe areas. In the 20th century, this happened in St. Vincent in 1971 and 1979, in Guadeloupe in 1976 and in Montserrat in 1995. Here are some of the hazardous volcanic effects that we can expect in the Eastern Caribbean.

These hot, fast moving mixtures of ash, rock fragments and gas flow from a collapsed eruption column or lava dome, travel down valleys and cause total devastation of the area over which they flow. Pyroclastic flows have been the main cause of destruction and loss of life in Montserrat since the onset of the Soufrière Hills Volcano eruption in 1995. They differ from pyroclastic surges in that they are more dense and usually travel with a greater physical force whereas surges usually contain more gases.

This turbulent cloud of gases and rock debris moves above the ground surface at great speeds. Pyroclastic surges form in a similar way to pyroclastic flows but their effects are more widespread since they may also sweep across ridges and hills as well as down valleys. A hot pyroclastic surge can cause death from suffocation, inhalation of poisonous gases and severe burns. Pyroclastic surges from Montagne Pelee completely destroyed the town of St. Pierre in Martinique in 1902, killing about 30,000 people.

Ballistic projectiles are rocks that an erupting volcano may hurl into the air. These blocks and bombs travel like cannonballs and usually land within 2km of the vent (but can travel as far as 5km, or even further, if the eruption is very explosive.)

Lava flows consist of molten (melted) rock that streams down the slope of a volcano, destroying everything in its path and possibly causing forest fires (as is typical of Hawaiian volcanoes). Lava in the Eastern Caribbean, however, is very viscous and does not flow very far from the vent. Rather, as the volcano emits lava it accumulates around the vent thereby creating a lava dome. These lava domes are often unstable and eventually they collapse and lead to pyroclastic flows.

Large quantities of ash produced during a volcanic eruption can be thick enough to collapse roofs, destroy vegetation and cause aircraft, ship and car engines to malfunction. They can also be very dangerous to people’s health since even the finest fractions of ash may cause serious respiratory problems if they are inhaled. This hazard may persist long after the eruption itself has ended and can affect neighbouring islands as well. 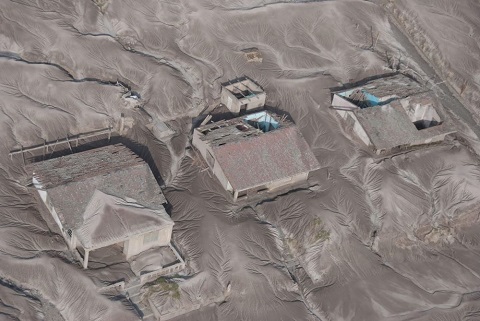 These are mixtures of volcanic water and rock fragments which rush down the slopes of a volcano and into the surrounding valleys. The word ‘lahar’ is an Indonesian term that describes a mudflow often triggered by heavy rains or earthquakes during and after a volcanic eruption. Lahars resemble wet concrete and they can move and contain large boulders, trees and may even bury entire towns. Lahars are destructive to everything in their path and may occur years after an eruption has ended.

Gases such as sulphur dioxide (SO2), and hydrogen sulphide (H2S) are present in toxic amounts close to the vent of an erupting volcano and may be present close to hot springs around any live volcano. Further away from the vent they can become dissolved in atmospheric clouds to produce acid rain and mist which affect human and animal eyes and respiratory systems and corrode metal building materials. One of the most common volcanic gases, carbon dioxide (CO2), is not poisonous but it is extremely dangerous. It is heavier than air and tends to accumulate in hollows in the ground, displacing the breathable air. Since it is invisible and has no taste or smell, people and animals are unable to notice that it is there and may suffocate if exposed for prolonged periods. People have died in this way at the Boiling Lake in the Valley of Desolation in Dominica.

Lateral blasts are horizontally-directed clouds of gases and extremely hot rock particles that explode outwards at very high speeds from the volcano. They can develop without warning during any explosive eruption and can destroy everything for miles within a fan-shaped area on the blast side of the volcano. Since they carry rock debris at high speeds, lateral blasts can devastate areas of tens to hundreds of square kilometres within a few minutes, and can destroy manmade structures and kill all living things by abrasion, impact, burial, and heat.

Debris avalanches are moving masses of rock and soil that occur when the flank of a mountain or volcano collapses and slides downslope. As the moving debris rushes down a volcano and into river valleys, it incorporates water, trees, bridges, buildings, and anything else in the way. Debris avalanches may travel several kilometers before coming to rest, or they may transform into more water-rich lahars, which travel many tens of kilometres downstream.

These are sea waves which can be generated by several events including large earthquakes or submarine volcanic eruption and impact of objects (including pyroclastic flows, debris flows and landslides) on the sea surface. These waves travel extremely fast (reaching approximately 800km/hr in the deep oceans) and can inundate low-lying coastal areas.