Most tsunamis are caused by large earthquakes occurring below or near the ocean floor. In order to understand how these tsunamis are caused it is useful to first understand how earthquakes occur. The Earth’s surface is made up of huge slabs of rock called plates which fit together like a jigsaw puzzle. The region where two or more plates meet is called a plate boundary. The plates are constantly moving but this plate movement is not smooth and continuous, rather the plates often lock together causing a build-up of energy. When the plates eventually move out of this locked position the energy that is released may be felt as an earthquake. 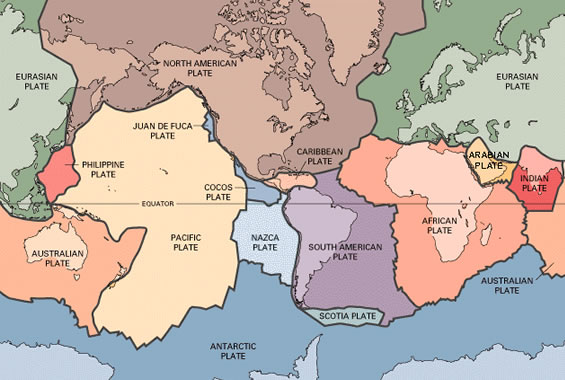 Map of the Earth’s plate boundaries. The outer layer of the Earth is broken into a dozen or so slabs of rock that are moving relative to one another. These are called Tectonic Plates.

Much of the world’s earthquake and volcanic activity takes place along plate boundaries. At these plate boundaries the plates interact with each other in different ways; some slide past each other, others spread apart and others move toward each other with crumpling or one dipping beneath the other. The latter type of plate boundary is called a subduction zone. Around the margin of the Eastern Caribbean, for example, denser oceanic plates slip under The Caribbean plate to create a subduction zone.

Subduction zone earthquakes are particularly effective in generating tsunamis as most strong earthquakes occur at subduction zones. If a strong enough earthquake (greater than M6.5) occurs in the ocean at a subduction zone the abrupt vertical shifting of the sea floor can send tons of rock shooting upward with tremendous force. The energy of that force is transferred to the water and pushes the water upward above normal sea level. Once the water has been pushed upward, gravity acts on it, forcing the energy out horizontally along the surface of the water.

This is similar to the ripple effect you get from throwing a pebble in the water, but in reverse: The energy is generated by a force moving out of rather than into the water. The energy then moves through the depths of the water and away from the initial disturbance. These waves are called tsunamis. All earthquakes do not cause tsunamis. There are four conditions necessary for an earthquake to generate a large tsunami:

Although infrequent, tsunamis can also be caused by volcanic events. Some of these are described below.

Volcanic eruptions can cause tsunamis when impact on water creates displacement of the ocean.

With on-land landslides (huge chunks of glaciers, volcanoes, rockfalls, land or other debris which slide into the sea) can cause tsunamis if the land along the coastline is forced into the ocean, creating a displacement of water. Landslide generated tsunamis are generally local tsunamis since the source is near the shore. The warning time may, therefore, only be a few minutes. The largest tsunami reported in the Caribbean was possibly the landslide-generated tsunami which impacted the northern coast of Guadeloupe. The event was triggered by an earthquake in 1867.

Extraterrestrial impacts from objects can also trigger tsunamis as falling debris from above displaces the water. These include:

This is a rare event. Evidence suggests that an impact on the order of a 10-megaton explosion could occur once every few hundred thousand years.

Local tsunamis – are generated by earthquake sources less than 100 km away and therefore have very short travel times usually less than 30 minutes from source to coastline. This is insufficient time for authorities to provide official warning. For example, the magnitude 8.1 earthquake near the Dominican Republic (1946) generated a local tsunami which impacted the Virgin Islands, Haiti and the Dominican Republic.

Regional tsunamis – are generated by earthquake sources 100-1000 km away and generally have travel times within the range of 30 minutes to 2 hours from source to coastline.

Tele-tsunamis – are generated by earthquake sources more than 1000 km away. Also called ‘distant tsunamis’ are generated by earthquake sources outside of the region with waves that can travel across entire ocean basins, such as the Atlantic Ocean. These waves may have travel times up to 24 hours before impacting distant coastlines. For example, in 1755, the Great Lisbon Earthquake triggered a tsunami which travelled across the Atlantic Ocean from Portugal and impacted the Eastern Caribbean islands including Barbados and Martinique. The Chilean Earthquake on February 27th, 2010 generated a tele-tsunami which travelled across the Pacific Ocean and impacted several countries including Hawaii and Japan.

Tsunamis on the Move

In the deep ocean, potentially destructive tsunamis can be small – often only a few tens of centimetres or less in height – and can neither be seen nor felt on ships at sea. Where the ocean is over 6,000m deep, unnoticed tsunami waves can travel at the speed of a commercial jet plane, over 800km per hour (~500miles per hour). They can move from one side of the Pacific Ocean to the other in less than a day.

Often, the first sign of an approaching tsunami is usually a dramatically exposed shoreline. As the tsunami approaches land the speed of the front of the wave decreases considerably. As a result, the trailing waves pile on top of the waves in front of them (like a rug crumpled against a wall), thereby significantly increasing the height of the wave before hitting the shore.

Offshore and coastal features can determine the size and impact of tsunami waves. Reefs, bays, entrances to rivers, undersea features and the slope of the beach all help to modify the tsunami as it approaches land. When the tsunami strikes the coast, often as a wall of water, sea levels can rise many metres. The first wave may not be the largest in the series of waves. One coastal community may see no damaging wave activity while in another nearby community destructive waves can be large and violent. The flooding can extend inland by one km (~0.5 mi) or more, covering large expanses of land with water and debris.

The Indian Ocean tsunami on 26th December, 2004 claimed over 250,000 lives and caused damage throughout the Indian Ocean making it the worst tsunami catastrophe in recorded history. It was also the first known basin-wide destructive tsunami in the Indian Ocean.

Tsunamis arrive as a series of waves anywhere from 10-60 minutes apart. Although a tsunami advances much slower as it nears land, these great waves are powerful enough to flatten houses, buildings and trees and can carry ships far inland. The major withdrawal of the sea should be taken as a natural warning sign that tsunami waves will follow. It should be noted, however, that there have been instances where there was no withdrawal of the sea before the arrival of the tsunami e.g. some areas of Sri Lanka for the 2004 Indian Ocean tsunami.

Wavelength: the distance from one crest of the tsunami to the next. Tsunamis have a very long wavelength, up to several hundred metres long.

Period: the time between two successive waves. This is also very long – about an hour in deep water so tsunamis may come ashore for hours.

Anatomy of a tsunami wave

The frequency of waves is measured by the time it takes for two consecutive waves to cross the same point. This is called the wave period. Tsunamis and normal waves have all of the same parts and are measured in the same ways, but there are many differences between the two. The chart below shows some of the differences.

The primary differences are size, speed and source. Large tsunamis are also different from tidal waves and normal ocean waves in the following ways: