In the past 500 years there have been ten confirmed earthquake-generated tsunamis in the Caribbean Basin with four causing fatalities. An estimated 350 people in the Caribbean were killed by these events.

Tsunami risk in the Caribbean

During the relatively short 500-year period of written Caribbean history, tsunamis have inflicted a small amount of losses compared to other hazards such as windstorms, earthquakes and volcanic activity. The impact of a large tsunami can be as devastating as an earthquake or an erupting volcano. Its capacity to travel over a wider area in a shorter time than a hurricane, gives a tsunami the potential to unleash destruction on regional and hemispherical scales, especially if a warning system is not in place. This was convincingly demonstrated by the December 2004 Indian Ocean tsunami and again in March 2011 in Japan. 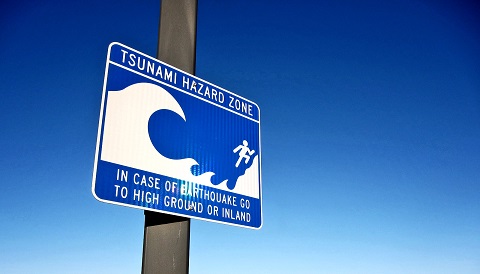 Potentially, there are two groups of earthquakes which may generate tsunamis in the Caribbean. These are:

Tsunamis caused by large volcanic eruptions at or below sea level also pose a threat to the Eastern Caribbean. The submarine (underwater) volcano Kick-‘em-Jenny located 9 km north of Grenada erupts on average every 11 years. At least two of those eruptions, in 1939 and 1965, generated small tsunamis that were witnessed on the north coast of Grenada. Detailed studies of the physical structure of Kick-‘em-Jenny conducted in 2002-2004, however, have shown that the volcano does not currently pose an immediate tsunami threat, but it is possible that future eruptions could change this situation.

The historical record suggests that potentially destructive tsunamis occur at an average rate of 1-2 per century in the Caribbean. The hazard is not the same throughout the islands. The north-eastern Caribbean region near Puerto Rico and Hispaniola is more susceptible to tsunamis. The average rate of occurrence in this area has approached 1 every 50 years in the last 200 years. In other sub-regions such as the southern Caribbean there are no historical records of destructive tsunami impacts.

Tsunami Events in the Caribbean and Adjacent Regions (CITC).