Most of the volcanic islands in the Lesser Antilles manifest some form of surface volcanic activity such as hot springs and fumaroles (i.e.hot gases). Those manifestations indicate that, although some of the volcanoes are not erupting, they are still active and that magma is present at depth. The presence of magma underground has two main implications: 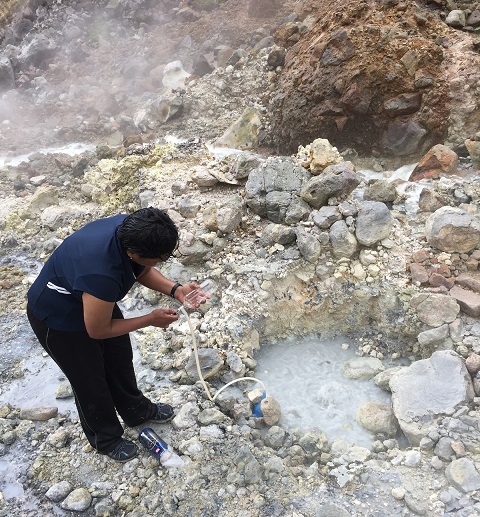 Scientist collecting gas samples at the Valley of Desolation, Dominica.

What happens at volcanoes in tropical regions – hence marked rainy seasons (e.g., Lesser Antilles) – is usually a mixture of both phenomena. Volcanic gases are typically made up of more than 80% of water vapour (H20) with some acidic gases such as Hydrogen Sulphide/Sulphur Dioxide, Carbon Dioxide, Hydrogen Chloride, Hydrogen Flouride (H2S/SO2, CO2, HCl, HF) and neutral gases (e.g., Methane, Carbon Monoxide – CH4, CO – Radon). Their temperature ranges from atmospheric temperature to magmatic temperature (i.e, ~25-1000ºC). In the Lesser Antilles, with the exception of Montserrat, gas temperature at the surface usually ranges between 30ºC and 200ºC. Hot springs have various pH (from acidic to basic), composition and temperature.

Most extreme temperatures for hot-springs can be found in the Valley of Desolation in Dominica, especially at the Boiling Lake, where water temperature is generally around 90ºC. The SRC initiated routine geothermal monitoring (measurement of temperature, pH, and chemical composition) of hot springs and fumaroles associated with Lesser Antilles volcanoes in 2001. Routine sampling in islands including Dominica, Saint Lucia, Grenada, St. Vincent, St. Kitts, and Nevis have taken place on an almost annual basis. We monitor hot springs and gas chemical composition through time as changes in physico-chemical properties through time can indicate a change in the volcanic activity. Samples are collected and analysed at The University of the West Indies St. Augustine Campus (Trinidad). In addition to the volcano monitoring aspect, we also conduct checks for environmental gas/water concentration in recreational areas to assess potential hazard to visitors (e.g. Saint Lucia).