Renewal of volcanic activity is often associated with deformation (swelling) of the ground around the volcano caused by rising magma “pushing” surrounding rocks to reach the surface. Such ground deformation is usually very small (1’s mm – 1’s cm) and, although it usually cannot be seen or felt by people living in the area, it can be detected by geodetic techniques. 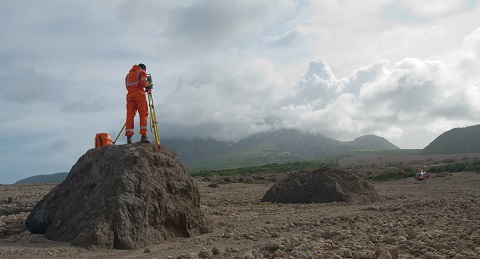 The SRC has a network of benchmarks or reference points -usually brass-pins or threaded rods cemented into the ground- in all the volcanic islands we monitor. The main technique used to measure their position (i.e., determine the geographical coordinates) is Global Positioning System (GPS). The overall concept is to determine the precise position in three dimensions (e.g. longitude, latitude & height) of receivers set up at these benchmarks by using data transmitted from satellites orbiting the Earth (whose positions we know precisely). By comparing the GPS coordinates of the benchmarks through time, we can determine whether they have moved and the direction of this movement. Such movement could indicate ground deformation due to a change in volcanic activity.

Since 2007, in collaboration with a number of other regional and international agencies, the SRC established a number of Continuously Operating Reference Stations (CORS) in several islands in the Eastern Caribbean (including Grenada, St. Vincent, Dominica, Saint Lucia, Antigua and St. Kitts). These permanently installed instruments record data continuously which are streamed to SRC in Trinidad via the Internet and VSAT.

At the SRC, we also use other techniques to monitor ground deformation. These include: a) Electronic Distance Measurements or EDM which enables us to determine the precise distance between various benchmarks, b) tilt metres which measure changes in slope angle or ‘tilt’ of the ground and c) Interferometric Synthetic Aperture Radar (InSAR) which compares radar images of the Earth collected from orbiting satellites to detect changes in the surface over time. InSAR has the potential to provide more extensive coverage of deformation monitoring over a wider geographical area when compared to GPS which only covers a few points per island.

The SRC uses a mixture of Septentrio and Trimble instruments for GPS monitoring. The SRC has fully adopted and implemented the GAMIT/GLOBK processing tool to produce high precision GPS position timeseries and velocities. Our GPS data repository is available by online request.