Kick-’em-Jenny is the source of a number of potential dangers. The most immediate and frequent danger is to marine vessels in the vicinity of the volcano during eruptions and during the ‘quiet’ periods between eruptions. The volcano lies directly beneath one of the main inter-island shipping routes and the area is popular both with recreational sailors and fishermen. For this reason Kick-’em-Jenny is carefully monitored and a 1.5 km exclusion zone around the summit of the volcano is currently in place. Although scientists continue to stress the improbability low probability of an eruption generating a tsunami (a giant sea wave) this hazard also remains of great public concern.

Kick-‘em-Jenny has two different eruptive styles: phreatomagmatic explosive eruptions or effusive dome extrusions. Although the mechanism for which contrasting style of activity will occur at a given eruption remains unclear, previous authors have surmised that efficient pre-eruptive degassing of dissolved volatiles from the magmatic system favours effusive activity while retention of the same produces explosive eruptions (Devine and Sigurdsson 1995). A route for gas escape created by fractures in the volcano edifice can lead to extrusive activity (Dondin et al. 2017), however, the triggering of explosive eruptions by rapid magma ascent or magma-seawater interaction cannot be ruled out.

Kick-‘em-Jenny’s proclivity for edifice instability has been established by its morphology and landslide deposits (Fig. 1). In addition to submarine landslides, likely mechanisms for Kick-‘em-Jenny related tsunami generation are volcanic earthquakes and submarine explosions (Smith and Shepherd 1993).  Although explosive eruptions from this volcano have in the past generated small waves on the surface, evaluation of bathymetric data has indicated that constructive eruptive growth episodes at this volcano are infrequent compared to the amount of material being shed from the cone and that its current vent height is insufficient to generate a tsunami from an explosive eruption (Lindsay, Shepherd, and Wilson 2005, Allen et al. 2018). Of more immediate concern are the direct hazards associated with the volcano, such as ballistic ejecta, water disturbances and lowered water density due to degassing (Lindsay, Shepherd, and Wilson 2005).

If Kick-’em-Jenny erupts, it might throw hot rocks up through the water column into the air above the surface of the sea. Such rocks could travel as far as 5 km from the volcano, and would pose a great danger to nearby ships or boats. Any ship which happened to be over the vent of Kick-’em-Jenny during the 1939 eruption would certainly have been destroyed.  In September 1952, a Japanese research ship was passing over the active Myojinsho volcano in the Pacific Ocean south of Japan when that volcano erupted ripping the hull apart. All 31 people on board were killed. This volcano is similar to Kick-’em-Jenny but of a slightly less violent type. 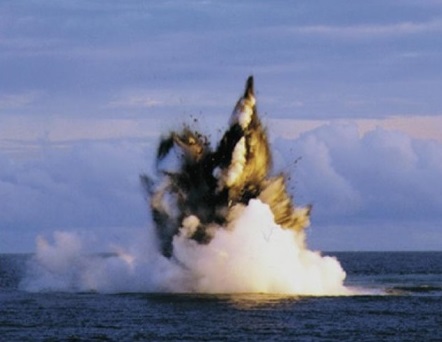 Ballastic projectiles from eruption of Kavachi Submarine Volcano in the Solomon Islands. (Photo by Pamela Brodi, 2000)

Submarine volcanoes release large quantities of gas bubbles into the water, even in quiet times between eruptions. This can lower the density of the seawater above the vent. This is very dangerous to shipping, because boats entering a zone of lowered water density will lose buoyancy and may sink. 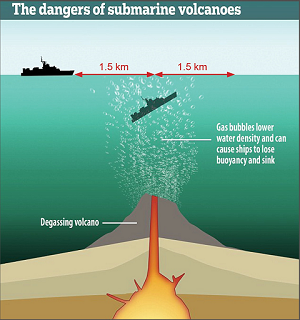 Tragedy of the Island Queen
One of Grenada’s worst maritime tragedies may have resulted from just this phenomenon. On the 5th August 1944, the wooden schooner Island Queen, with over 60 people on board, disappeared between Grenada and St. Vincent. At the time it was thought that a German or allied submarine had torpedoed the boat. These theories, however, cannot easily explain the total lack of debris after the boat’s disappearance. However, if a boat sinks because of lowered water density everything would sink.
Kick-’em-Jenny had, in fact erupted the year before (1943) and it is highly likely that it was still actively degassing in 1944, without any signs at the sea surface of such activity.

Studies show that the worst eruption that Kick-’em-Jenny is capable of under any circumstances might generate a wave with an amplitude of 10 m in open waters at a distance of 10 km from the vent. Waves of this amplitude could be generated only if the volcano began to erupt in water depths of less than about 130 m. Currently the depth to the vent is 268 m.

Prior to bathymetric measurements in the early 2000’s it was thought that Kick-’em-Jenny was growing steadily towards the surface and thus approaching depths at which previous workers (e.g. Smith and Shepherd 1996) had suggested that eruptions could become more explosive. Thus in addition to direct hazards caused by volcanic activity, such as water disruptions and ballistic projectiles over the volcano, there was some speculation that the probability of an eruption-generated tsunami was increasing. However, with the re-evaluation of previous surveys showing clearly that the volcano is not growing towards the surface, together with the results of the 2002 and 2003 surveys which revealed that the vent region of the volcano (the crater floor) is 268 m below sea level, the likelihood of a tsunamigenic explosive eruption is now considerably lower.  Eruption-generated tsunamis may, of course, become a more significant hazard if Kick-’em-Jenny does begin to grow closer to the surface.

The best-studied example of underwater dome growth in the West Indies occurred at La Soufriere volcano in St. Vincent in 1971. On that occasion a dome began to grow at the bottom of the 175 m deep crater lake in early October 1971 and reached the surface in late September. By analogy with this episode we would expect a period of one to two months of steady eruption before Kick-’em-Jenny grows into the violently explosive range of depths.

For a detailed study of the potential effects of eruptions of Kick-’em-Jenny, particularly its potential for generating tsunamis, see the Kick-‘em-Jenny bibliography section.