The volcano consists of an asymmetric cone that emerges from a horseshoe shaped collapse scar thought to represent “proto-Jenny”. This ancestral volcano is modelled to have once stood above sea level before collapsing 43.5 kyr before present, (Dondin et al. 2017, Dondin et al. 2012). In fact, it has been proposed that Kick-‘em-Jenny is the active vent of a much larger magmatic system which encompasses nearby submarine volcano Kick-‘em-Jack and islands Île de Ronde and Île de Caille to the east (Lindsay and Shepherd 2005; Lindsay, Shepherd, and Wilson 2005). Associated with Kick-‘em-Jenny’s edifice are numerous landslide deposits downslope. 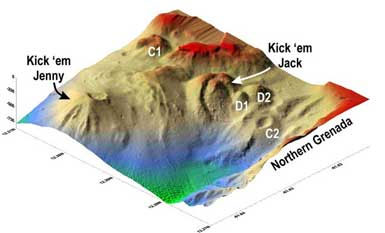 SeaBeam image of Kick-’em-Jenny showing craters and domes. During a research cruise in March 2003 scientists discovered three craters (C1, C2 and Kick-’em-Jack) and two domes (D1 and D2) near Kick-’em-Jenny. Further investigations are needed to confirm whether these are separate ‘live’ volcanoes. 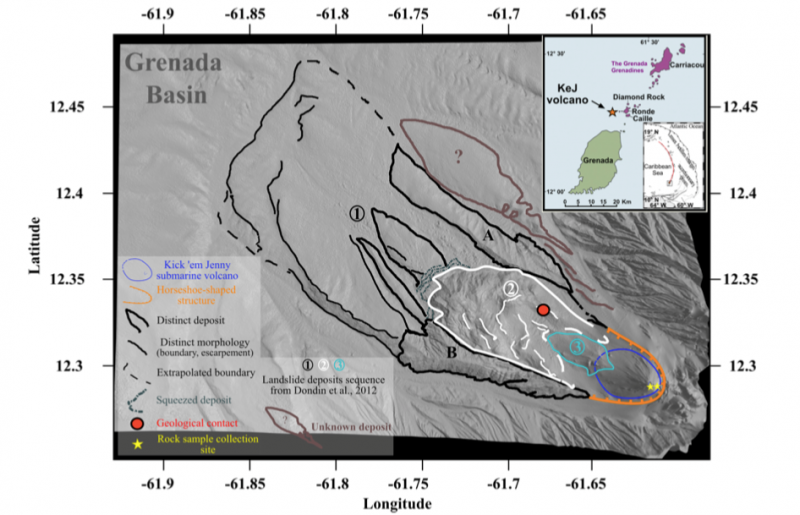 Kick-‘em-Jenny is a relatively young volcano, and it seems likely that it will continue to erupt in the future, eventually forming a shoal and then a new island. We do not know how long it will take for the volcano to grow to the surface. The best-studied example of underwater dome growth in the West Indies occurred at the Soufrière volcano in St. Vincent in 1971. On that occasion, a dome began to grow at the bottom of the 175 m deep crater lake in early October 1971 and reached the surface in late September 1972. By analogy with this episode, we would expect a period of almost a year of steady effusive eruptive activity before Kick-’em-Jenny breaks the surface. This represents the fastest growth scenario.

It is also possible that the volcano could grow step-wise towards the surface, with long periods of no activity interspersed with short periods of growth and also including periods of dome collapse and re-growth. This would take much longer, e.g. possibly tens to hundreds or even thousands of years. The more likely scenario in the short term, based on collated bathymetric data over the past 30 years (Allen et al. 2018), includes a regular interplay between volcano growth during eruption and material being lost from the cone by landslides and slumping, with the latter mass wasting processes being more significant.

Written histories of the West Indies do not mention Kick-’em-Jenny before 1939, although there must certainly have been many eruptions before then. The name “Kick ’em Jenny” appears on many old maps where it usually refers either to the small island now more commonly called Diamond Rock (or Île Diamante) or to the whole passage between the Île de Ronde and Grenada.

During the historic period, Kick-‘em-Jenny was first discovered in 1939 after a large eruption was witnessed from northern Grenada (Devas and MacAdam-Sherwin 1939). Since then, 13 eruptions have been documented, the most recent in April 2017, making this volcano the most historically active for the entire Lesser Antilles arc. These eruptions have been detected by visible surface phenomena and/or T-phases (low frequency seismic signals of hydroacoustic waves generated by earthquakes, submarine landslides and/or explosions). T-phase signals are not necessarily an absolute indicator of an eruption, but could also result from interaction between seawater and hot material uncovered by submarine landslides (Allen et al. 2018).

Prior to 2001, eruptions were not associated with instrumentally recorded, precursory seismicity; this pattern of activity changed in 2001 and the three eruptive episodes, since that time, include precursory volcanic earthquakes. In 2018, there was a period of high level Kick-‘em-Jenny seismicity that was not followed by an eruption. Earthquakes associated with Kick-‘em-Jenny volcanic activity are often felt in northern Grenada, the Grenadines and of distances up to 400 km from the volcano (Smith and Shepherd 1993).