The UWI-SRC operates a network of over 60 seismic stations strategically positioned on islands throughout the Eastern Caribbean with access to approximately 100 from other regional agencies. Continuous data from nearly all stations is transmitted directly to our office in St. Augustine, Trinidad, for real time processing and analysis.

Earthquakes which produce seismic waves are monitored using seismometers. These instruments which were first used to ‘listen’’ for ground vibrations from nuclear testing during World War II operate on the principle of inertia. A series of suspended and balanced pendulum-like masses remain stationary but move when the earth vibrates. This vibration is then recorded on a seismograph as a series of wave motion lines called seismograms. When multiple seismic stations record the same earthquake event it is then possible to calculate the location of the event using the principle of triangulation. The magnitude, depth and time of the event can also be calculated from these recordings. 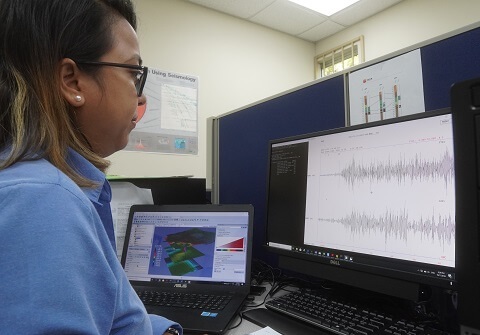 The principle of triangulation is possible due to the existence of different types of seismic waves. An earthquake produces three types of waves that travel through the Earth’s crust, P-waves, S-waves and Surface waves. Using the difference in arrival times between the P and S waves, with recordings from at least three different seismic stations, earthquakes can be located.