Volcano Monitoring in the Eastern Caribbean

Volcanoes in the Eastern Caribbean do not usually erupt suddenly without warning. Eruptions are normally preceded by clear signals, which, once recognized, enable timely warnings to be issued. These signals are referred to as precursory volcanic activity. Good indications of volcanic unrest are: 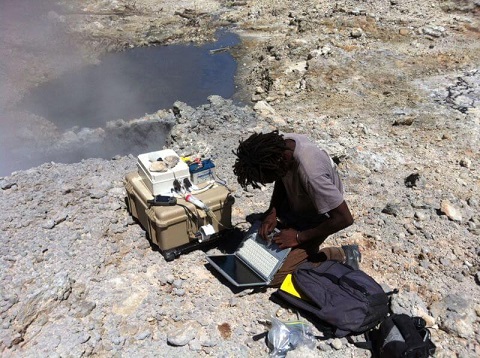 Changes in the flow of streams, frequent landslides and death of vegetation or small animals are also symptoms which have been observed as precursory phenomena at some volcanoes. Regular visual inspection by people, who are familiar with the normal state of the volcano, may reveal unusual symptoms that may be signaling heightened volcanic activity. For example, the SRC maintains partnerships with tour guides and local forestry officers in some islands, such as Dominica and St. Vincent, and they are able to advise about visual changes in remote areas associated with volcanoes such as the Boiling Lake (Dominica) and La Soufrière crater (St. Vincent).

At the SRC, we use a variety of volcano monitoring techniques to keep watch over our volcanoes in the region. A network of seismic stations is used to detect earthquake activity, GPS (Global Positioning System) measurements are taken to track ground deformation (swelling or deflating) of the volcanoes’ flanks, and the chemical composition of hot springs and gases is also monitored through time. Any changes in activity are communicated to island governments usually through the National Disaster Management Organization.

We rely on valuable monitoring equipment such as GPS antennas and solar panels which are essential in keeping watch over our region’s volcanoes. Tampering with this equipment will hamper the ability of our scientists to detect the early signs of an impending eruption and may put the public at risk.