The Eastern Caribbean is an example of an island arc system formed at a convergent plate boundary (more specifically, at a subduction zone, where two tectonic plates meet and the denser plate is forced beneath the lighter plate). This is the main cause of the volcanic and seismic activity in the Eastern Caribbean. 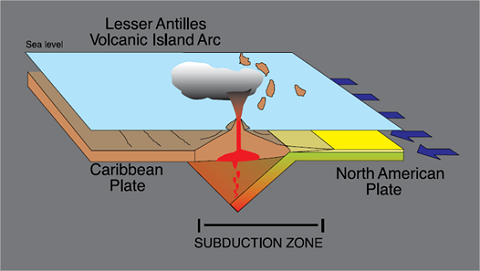 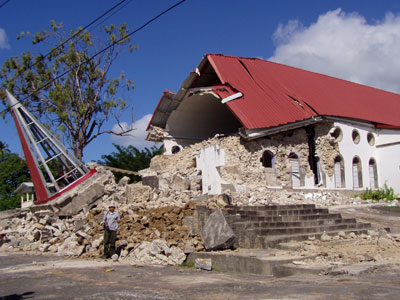 Damage to a church in Dominica following M6.3 earthquake northeast of Dominica (2004)

One striking example is that of Trinidad in 1766; although the population was small and the economy minuscule, the effects of the earthquake were devastating enough to cause the inhabitants to petition the King of Spain to allow settlement from other, non-Spanish, Caribbean islands. Prior to this event, there was another major earthquake in Jamaica (N.W Caribbean) in 1692 which resulted in the death of over 2,000 persons and destroyed 90% of the then capital, Port Royal. In fact, it is clear that such major earthquakes are likely to cause even more damage if they were to occur now or in the future because of increasing population sizes coupled with large-scale poorly planned urban centres and unregulated construction. A clear example of this was Haiti’s 2010 magnitude 7.0 earthquake which devastated Port-au-Prince and resulted in the deaths of more than 200,000 persons.

Although there are considerable variations in the level of activity, no island in the region is completely free from the threat of earthquakes.

How are earthquakes and volcanoes formed in the Eastern Caribbean

Near Misses during the period 1900 – Present

This information clearly indicates that Eastern Caribbean earthquake activity carried on unchanged through the 20th and 21st centuries. During the 20th and 21st centuries, the vulnerability of all islands to major earthquakes increased enormously because of continuous population growth and changes in building and land use practices. At the beginning of the 20th century, most buildings in the region were made of wood or similar materials, which have a high intrinsic earthquake resistance. High-rise buildings and the use of reclaimed land were also uncommon. However, the current situation on every island is such that most buildings are made of masonry or concrete and there are numerous high-rise buildings, of which a high proportion are built in areas which were under the sea less than a century ago, i.e.reclaimed land.