The islands of the Eastern Caribbean or Lesser Antilles, form a curved chain of volcanic islands along the eastern margin of the Caribbean Sea that stretches ~850 km from Grenada in the south to Sombrero (north of Anguilla) in the north. Such a curved chain of volcanic islands, which has formed as a result of magmatism associated with subduction, is referred to as an ‘island arc’. Not all the islands of the Lesser Antilles, however, have ‘live’ (likely to erupt again) volcanoes. North of Dominica the island arc splits into two, and only the western arc of islands, known as the ‘Volcanic Caribbees’ is active. The eastern arc is referred to as the ‘Limestone Caribbees’. Volcanism in the Limestone Caribbees died out many millions of years ago as the axis of volcanism migrated westwards due to changes in subduction geometry, and the old volcanic landscape has since been eroded and covered by coral and limestone.

Volcanoes in the Eastern Caribbean

The Lesser Antilles includes 21 known, ‘live’ (likely to erupt again) volcanoes spread across 11 volcanically active islands, and volcanic eruptions are one of the main hazards that threaten the Eastern Caribbean region. During the past 200 years over 30,000 people have been killed by volcanic activity in this region and currently about one million people are threatened by the direct effects of volcanic eruptions and about two and a half million more by related phenomena such as volcanic ash fall. Most of the islands of the Lesser Antilles have a single live volcano that may erupt in the future (e.g. Nevis, Montserrat). The other islands are more complex, of which Dominica is the most extreme with no less than nine live volcanoes.

How are earthquakes and volcanoes formed in the Eastern Caribbean

Historical eruptions in the Caribbean are generally regarded as those that have occurred since Europeans settled the region and began producing written accounts of events. This period varies across the region; in most islands European settlement began in the early 1600’s, but was intermittent for most of the 17th Century, changing hands several times between various European powers. Several early records of life in the islands include unsubstantiated reports of volcanic activity (e.g. in St. Kitts and St. Vincent). Conversely, radiocarbon dates of several eruptions (e.g. in Montserrat and Saba) imply that volcanoes in these islands were active during the historical period for the region, yet no written accounts have been found. There is, therefore, uncertainty both in defining the ‘historical period’ in the region and also with quantifying the actual number of historical eruptions. Best estimates, however, indicate that there have been at least 34 historical eruptions of volcanoes in the Lesser Antilles, 21 of these have occurred since 1900; nine on land from volcanoes in Guadeloupe, Martinique, St. Vincent, Montserrat and Dominica, and 14 from the submarine volcano Kick-‘em-Jenny, ~9 km north of Grenada.

The 21 most recent eruptions have shown a wide variety in both eruptive style and impact on the local population. Several have been phreatic (steam) in nature, one a very minor phreatic eruption in Dominica in 1997 that went largely unnoticed and two much more serious phreatic eruptions in Guadeloupe in 1956 and 1976-1977, the latter resulted in a 3.5 month evacuation of over 70,000 people. 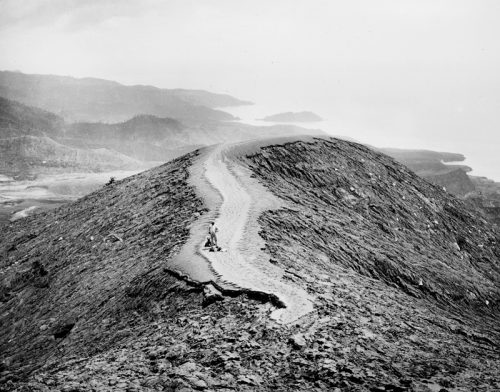 Crest of the Half Way Ridge, 450 metres above sea level on 31st May 1902 showing the destructive impact of heavy ashfall on vegetation following eruption of La Soufrière, St.Vincent in 1902. (Photo: T. Anderson, York Museum Collection)

The 1902 eruption of La Soufrière in St. Vincent was an explosive magmatic eruption that resulted in the deaths of at least 1,500 people; in contrast, the 1971-1972 eruption at this volcano was wholly effusive, and resulted in the formation of a lava dome confined within the summit crater. The 1979 eruption of La Soufrière was explosive followed by dome growth, and although there was some property damage no lives were lost. The 1902-1907 eruption of Montagne Pelée in Martinique is ranked among the world’s most devastating in terms of destruction of lives and property. This eruption was characterised by both effusive dome formation and explosive dome collapse, and led to the total destruction of the town of St. Pierre and the deaths of approximately 30,000 people. A similar eruption occurred from Montagne Pelée several years later, between 1929 and 1932, this time with no reported casualties.

The 15 submarine eruptions of Kick-‘em-Jenny have been dominantly explosive, although in at least one case a lava dome was extruded. The Soufrière Hills Volcano in Montserrat has been in active eruption since 1995, and has had a major impact on the island’s population. The eruption is characterised by periods of dome-growth interspersed with dome collapse and minor explosions. The Soufrière Hills Volcano is the only volcano currently erupting in the Eastern Caribbean. In addition to these volcanic eruptions, historical volcanic earthquake swarms have been observed in almost all of the Eastern Caribbean islands with live volcanic centres. 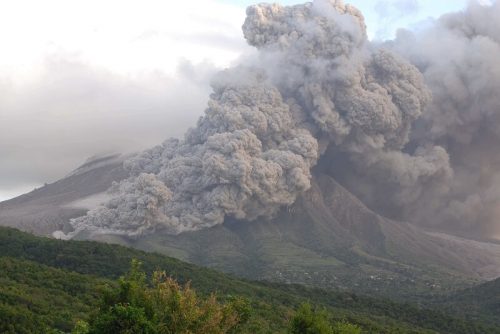 Additionally, while property destruction levels from severe hurricanes generally range from 10-25%, property destruction levels (and by extension, casualties) in the Eastern Caribbean caused by volcanic eruptions approach 100% in the most severely affected areas. Thus, the only appropriate action that can be taken to prevent this is a total evacuation of the areas likely to be affected. For this reason, public education and awareness in advance is crucial to successful disaster preparedness and mitigation programmes in that it equips the public with the necessary information to be able to make informed decisions and to facilitate (rather than obstruct) disaster response action in the event of a crisis.

In assessing the threat posed by volcanoes to Eastern Caribbean countries, it is useful to review data on actual volcanic disasters over the past 300 years (see tables below). Keep in mind that there have been at least 15 other eruptions that have not resulted in large numbers of deaths or destroyed enough property to be ranked as disasters.

Volcanic eruptions and earthquakes share the common feature that they happen fairly infrequently but when they do happen the consequences can be devastating. By unfortunate coincidence the mean interval between such disasters is roughly comparable with one human lifetime so that the memory of the previous event would have just about faded from public consciousness when the next one occurs. Maintaining public preparedness for geologic disasters through the long, quiescent periods, therefore, presents a significant challenge.