The Republic of Trinidad And Tobago

The most southerly island of the Lesser Antilles. Trinidad has an average length of 80 km and an average width of 59 km. The island appears rectangular in shape with three projecting peninsular corners. It is traversed by three distinct mountain ranges (Northern, Central & Southern) and the highest peak, El Cerro del Aripo (940 m) is located in the Northern Range. Tobago is 30 km northeast of Trinidad and is 41 km in length and 12 km at its greatest width. Trinidad has a maritime tropical climate influenced by the northeast trade winds. Temperatures range between 20°C- 34°C and there are two seasons: Dry (January-May) and Wet (June-December). Trinidad lies outside the hurricane belt but has been affected by tropical storms in the past.

Approximately 1.26 million people reside in Trinidad. People are referred to as ‘Trinidadians’ or ‘Trinis’ (colloquial). English is the country’s official language. The island is one of the most ethnically diverse in the Lesser Antilles archipelago and this leads to a diverse mix of culture, food and traditions. Currency used: Trinidad and Tobago Dollar (TTD).

In the event of an earthquake or tsunami the Office of Disaster Preparedness & Management is the official authority in Trinidad & Tobago.

The Trinidad and Tobago area, as shown in the epicentral plot, is one of the more seismically active zones in the Eastern Caribbean, with an annual average output of about 260 earthquakes of magnitude greater than 2.0. However, the activity rate is not uniform across the area.  The areas north and east of Trinidad have annual average output rates of about 45 and 25 events respectively. The area on land Trinidad exhibits the lowest rate with less than 20 events. The rate in the Tobago area has picked up since 1990 and whereas in the past the rate was on par with that seen on land Trinidad, it is now closer to that seen north of Trinidad.  The most active areas are north of the Paria Peninsula and the Gulf of Paria with annual, average rates of about 100 and 60 events respectively.  The epicentral map of earthquakes, since 2000, shows events of magnitude greater than 3.5; the other plots show the daily and cumulative numbers of all events located for the period and annual magnitude distribution in the area for events of magnitude greater than 3.5.  Differences in the depths of the events in the various zones are evident in the epicentral plot.  Following are details of the significant magnitude events observed in the zones making up the area:

Trinidad is located at the junction of the actively deforming southeast corner of the Caribbean Plate and the northeast margin of South America. It composed of metamorphosed Mesozoic rocks in the Northern Range, thought to be geologically continuous with related rocks in northern Venezuela(Donovan 1994a, with sedimentary rock successions making up the rest of the island, known collectively as the Trinidad Province(Donovan 1994b). 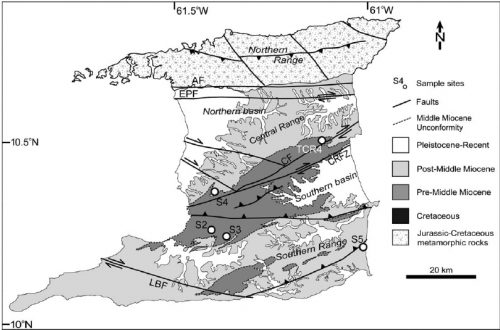 Simplified Geological Map of Trinidad from Xie and Mann (2014)

Five structural units have been identified on land, cut by a number of major (strike-slip) faults:

Each unit can be further divided based on stratigraphy into a number of formations) details of which will not be discussed here. For further information on these distinctions please refer to Donovan (1994b). The presence of hydrocarbons in Trinidad, which has fueled this island’s lucrative Energy Sector, is largely due to prolific Upper Cretaceous source rocks being overlain by thick successions of Paleogene deep water sediments and shallow marine siliciclastic reservoir rocks (Ministry of Energy and Energy Affairs 2014) 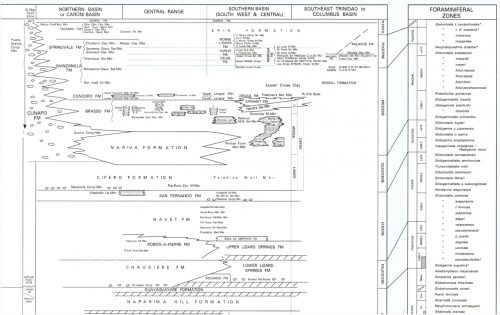 Trinidad lies at the south-east corner of the Caribbean plate, close to the second most seismically active zone in the Eastern Caribbean. Tectonically it is a complex area because to the north there is subduction of Atlantic Ocean lithosphere beneath the eastern boundary of the Caribbean plate and to the west there is strike-slip motion between the southern Caribbean plate boundary and the South American plate. The transition between the two types of motion gives rise to different seismogenic zones with distinct characteristics.

North of Paria Peninsula seismogenic zone – this area is the second most seismically active area in the Eastern Caribbean and has generated major-great earthquakes in historic times. The 1766 magnitude 7.9 event, estimated to have been located in this area, is reported to have destroyed the then Capital of San José and the 1888 magnitude 7.5 event was damaging from Trinidad to St. Vincent. The largest event for the instrumental period, i.e. since 1952, occurred on 1968/09/20 and was of magnitude 7.0. Significant damage was caused in Venezuela and in Trinidad there was damage in Port of Spain. There are approximately 65 events of magnitude 2.1 and above, located in the area annually. The most significant recent event, of magnitude 5.9, occurred on 2000/10/04. The earthquakes can range in depth from less than 15 km to deeper than 150 km. Both the magnitude and depth of an earthquake are important in the level of shaking it can produce at a given site.

Gulf of Paria and Paria Peninsula seismogenic zone – approximately 40 events of magnitude 2.1 and above are located in this area annually. The largest earthquake recorded during the instrumental era occurred on 1983/04/11 and was of magnitude 5.8. One event in the magnitude range 4.6-5.0 is expected every year and one in the magnitude range 5.1-5.5 approximately every 5 years. The zone generates earthquakes ranging in depth from less than 15 km to over 150 km. However, within the zone, separate areas are characterised by specific depth ranges. For example the Paria Peninsula area generates most of the deeper events 70 km and deeper. The majority of events of depth less than 16 km tend to be clustered near 10.35°N and 62.3°W in the Gulf of Paria. The events closer to Trinidad form a more diffuse cloud and tend to be located deeper than 15 km.

North of Trinidad seismogenic zone – the largest known earthquake in this area was of magnitude 6.5 and occurred on 1954/12/04. One person was killed and many were injured. There was a significant amount of minor to moderate damage in northern Trinidad. In the area, solutions are found for about 28 events of magnitude 2.1 and above annually, with an earthquake in the magnitude range 4.6-5.0 occurring every five years, the most recent being in 2005. The biggest event, since that of 1954, was of magnitude 5.2 and occurred on New Year’s Day 1996.

East of Trinidad seismogenic zone – From 1953, when the Seismic Research Centre (formerly Unit) began its monitoring work in the Eastern Caribbean, until the end of 1985 the area east of Trinidad manifested a low level of seismicity, less than ten events annually, both in terms of numbers of events and their magnitudes. The area was, therefore, considered to possess low seismic potential. A puzzling slight increase in the number of events seen in the area in 1986 and 1987 did not warrant a change in the classification. The perception, however, was completely shattered on 1988/03/10 at 02:17 a.m., local time, by the occurrence of a magnitude 6.3 event about 50 km off the east coast of Trinidad. Since that time, there have been episodic sequences, in 1994 and 2004, interspersed by a low level of background earthquakes. Currently, the annual average is about 25 earthquakes. The majority of events in the area occur at depths below 35 km.

On land Trinidad seismogenic zone – Since 1980 and prior to 2004, there have been, on average, 13 events annually, in general of magnitude less than 4.1. There was, however, one event in 1981 with a magnitude of 4.8. Since 2001, there has been an increase in the numbers of earthquakes being recorded with a sequence occurring in 2004/2005, which generated two events in the magnitude 5.1-5.5 range. Most of the events occur at depths below 20 km.

South of Trinidad seismogenic zone – During the instrumental period since 1952, there has been negligible seismicity generated in the zone closest to Trinidad. However, periodically the Amacuro Delta in eastern Venezuela generates earthquakes above magnitude 5.0.