The UWI Seismic Research Centre (SRC) is pleased to announce that Dr. Walter Salazar has been presented with a “Distinguished Salvadoran” national award in recognition of his contribution to the development and promotion of El Salvador. This award was established to commemorate the Bicentennial Independence Day celebrations of El Salvador.

A native Salvadoran, Dr. Salazar leads the Seismic Hazard/Risk Assessment projects at the UWI Seismic Research Centre where one of his primary roles is to strengthen and provide direction for the science/engineering interface between the UWI and the SRC. He has also worked closely with the EUCENTRE in Pavia-Italy to produce the first peer-reviewed Seismic Hazard Maps for the Eastern Caribbean Islands and he leads the World-Bank funded Seismic Risk Atlas Project for three pilot states in the Caribbean. He has recently been appointed to be a peer reviewer of the Journal of Civil Engineering and Architect and the NED Journal of Engineering Research.

During his acceptance speech, Dr. Salazar thanked his family profusely for their support throughout his career and expressed his gratitude to the UWI SRC for research opportunities and for its support of international work with several colleagues in South America, the Caribbean and Europe. “I would like to take this opportunity to ignite an initiative in our University and the Organization of the Caribbean States to collaborate for the establishment of a Central American and Caribbean Earthquake Engineering Centre to excel Post Graduate Education for the future generations in the Region,” stated Dr. Salazar.
During the Awards Presentation Ceremony which was held at the Association of Caribbean States in Port of Spain, Trinidad, Chargé d’Affairs at the Embassy of El Salvador, Mr. José Roberto García Prieto remarked that “This is a unique opportunity to congratulate those who have made us proud to be Salvadoran.” 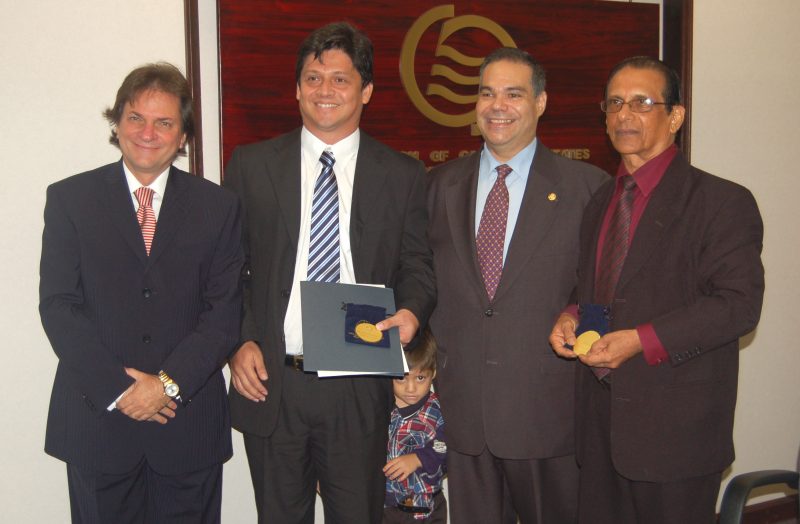 Dr. Salazar began his Earthquake Engineering Postgraduate studies in 1998 at the International Institute of Seismology and Earthquake Engineering (IISEE) in Tsukuba, Japan. His interest in this field led him to continue studying at the Tokyo Institute of Technology, gaining the Doctoral Degree as an Engineering Seismologist in 2004. He focused his research on the site-effects evaluation via-application on inversion techniques on strong ground motion data. In El Salvador, Dr. Salazar participated in a Seismic Risk Project at Central American University supported by the European Economic Community, compiling an earthquake catalogue and performing seismic hazard assessments for El Salvador; simultaneously he participated in the installation and maintenance of a digital strong motion network which successfully recorded in 2001, the destructive subduction and upper-crustal earthquakes of M 7.8 and M 6.5 in El Salvador, respectively. From 1995-1998 he was a visiting researcher at the Imperial College of London and Universidad Complutense de Madrid.

Also receiving an award was Professor Kenneth Ramchand for the support given during his tenure as UTT president to cultural activities organised by the Embassy of El Salvador.