The UWI Seismic Research Centre, St. Augustine, Trinidad and Tobago W.I. June 17, 2022—High commendation was bestowed on The University of the West Indies (The UWI) from the world’s leading global volcanological association. The regional University’s Seismic Research Centre (UWI SRC), located at the St Augustine Campus, was announced as winner of the 2022 Volcanic Surveillance and Crisis Management Award presented by the International Association of Volcanology and Chemistry of the Earth’s Interior (IAVCEI) on Thursday, June 16. Director of the UWI SRC, Dr Erouscilla Joseph accepted the award in Heraklion, Greece during the Association’s 11th Cities on Volcanoes Conference (COV11).

The prestigious, peer-nominated accolade, awarded biennially, recognises the Caribbean team of experts at the UWI SRC for its outstanding management of the 2020-2021 eruption of La Soufrière in St Vincent and The Grenadines. The nomination was based primarily on The UWI SRC’s response, made particularly challenging within the context of the global pandemic. Due to UWI SRC’s state-of-the-art monitoring techniques, robust partnerships and timely communication with stakeholders, approximately 16,000 people were evacuated ahead of the explosive phase with no reported serious injuries or casualties. 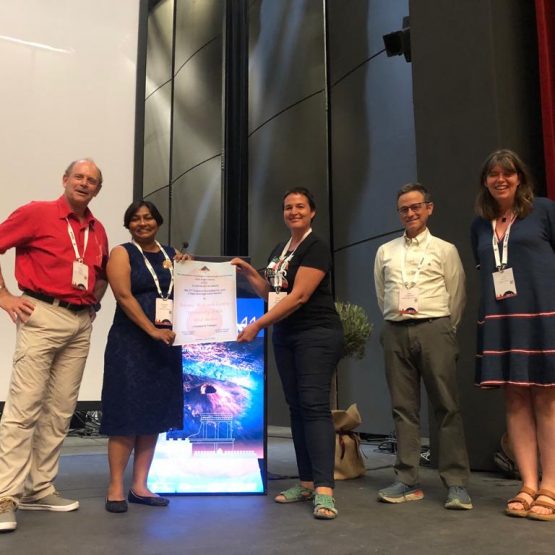 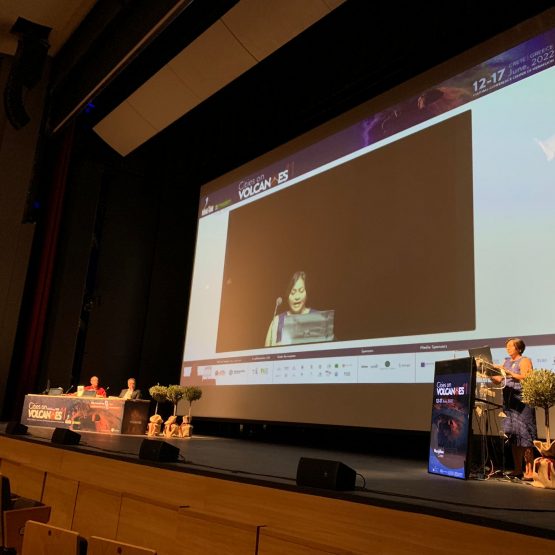 Director of The UWI Seismic Research Centre, Dr Erouscilla Joseph delivers an acceptance speech after receiving the 2022 Volcanic Surveillance and Crisis Management Award from the International Association of Volcanology and Chemistry of the Earth’s Interior on Thursday, June 16 in Heraklion, Greece.
A team comprising experts from UWI SRC and Montserrat Volcano Observatory was the first among a rotation of several scientific teams, deployed to St. Vincent from December 2020 following the confirmation of new dome growth detected by SRC scientists using NASA satellite imagery. Dome growth at the volcano signalled the beginning of an effusive eruption, which escalated to an explosive phase in April 2021. In addition to leading the science through monitoring, researching, educating, and advising, the UWI SRC has also been providing critical communications response that has received commendation from the international volcanological community. Leading up to, and throughout La Soufrière’s explosive phase, UWI SRC worked closely with the country’s National Emergency Management Organisation (NEMO) to help the Government and its agencies in risk communication in addition to shaping public policy and response plans. Major volcanic ashfall covered most of mainland St. Vincent and neighbouring islands, most notably Barbados among other hazards.
President of the IAVCEI, Dr Patrick Allard, commented “This Award, previously attributed to volcano Institutes in Indonesia (2018) then Ecuador (2020), recognises and honours the remarkable role UWI SRC has played for almost 70 years in monitoring active volcanoes in the Caribbean island arc and in responding to volcano-seismic crises that occurred in this region, especially the Soufrière Hills eruption on Monserrat (1995-present) then the Plinian eruptive events at La Soufrière of St Vincent in 2020-2021.” Dr Allard added, “The successes achieved by the UWI SRC during these events—in terms of scientific monitoring, hazard assessment and even co-management of emergency response, in a context of limited resources available, are fully acknowledged by the international volcanological community and well deserve this 2022 awarding.”

Dr Erouscilla Joseph and other UWI SRC staff members convened and participated in scientific sessions and workshops at the COV11 conference in Greece. In response to the award, she commended the IAVCEI for supporting under-resourced agencies of the Global South. “The operations of the UWI SRC are essential for the continued monitoring of the low frequency, high impact geophysical hazards affecting the Caribbean. The issue of significant financial challenges posed by inconsistent and inadequate funding from contributing territories is a longstanding one that has resulted in annual budget cuts over the past ten years, which have considerably impacted the strength of our monitoring and advisory capability.”

The successful management of the eruption stemmed from the UWI SRC’s longstanding partnership with regional authorities and its commitment to serving the region as part of the broader mandate of The University of the West Indies. “The response to the eruption of La Soufrière is a reflection of the hard work,expertise and commitment of all staff who worked tirelessly throughout the eruption some of whom, often put their own lives at risk because we were conscious that people’s lives and livelihoods would be affected,” stated Dr. Joseph.

Congratulating the UWI SRC, Vice-Chancellor of The UWI, Professor Sir Hilary Beckles noted that he is particularly proud of the “ONE UWI” scientific capacity and response strategy of the Centre which is funded and supported through the University’s Regional Headquarters. “Our Seismic Research Centre is a demonstration of harnessing The UWI’s mandate of service in action to the region. We are truly encouraged to have this international recognition for the Centre’s work, as yet another signal of our achievements as a global university rooted in the Caribbean, remarkably punching above our weight.”

The UWI SRC also received congratulatory messages from members of the volcanicalogical community around the world. Dr Nicolas Fournier, Volcanology Team Leader at GNS Science (New Zealand) and member of the peer-nomination panel stated, “What UWI SRC achieved with its available resources as the eruption rapidly transitioned from dome building to explosive phases is nothing short of extraordinary. This award is an opportunity to recognise not only the fantastic work that UWI SRC did during the eruption at Soufrière but also the level of respect it gathered from around the world,” he added.

“This combination of (UWI SRC’s) excellent, dedicated monitoring, hard physical work and inventive and empathetic approaches to communication in no small way contributed to the rapid way in which the authorities and communities moved from advice to action during that moment on April 8, before explosions started,” stated Professor Jenni Barclay, Volcanologist at University of East Anglia in the UK, and member of the peer-nomination panel. “What set (UWI) SRC’s effort apart was the fantastic level of communication they provided both to the government agencies and the public and communities of St. Vincent,” added Barclay.