Stories and stills mark the anniversary of 2020-2021 La Soufrière eruption, St. Vincent and the Grenadines

The UWI St. Augustine, Trinidad & Tobago. Monday, April 4, 2022. — Vincentian stories are set to feature in a short film and photo exhibition one year after the explosive eruption at La Soufrière.

In recent months, residents of Saint Vincent have been a part of two recovery projects executed in partnership with The University of the West Indies Seismic Research Centre (UWI-SRC). The first project, a collaboration with the University of Cambridge, produced a short film.  In the film, community residents tell their stories of resilience in the face of uncertainty. Residents share key lessons on preparedness and relive the events of the eruption.

In commemoration of the one-year anniversary of the eruption of La Soufrière (2021), there will be public screenings of the film throughout the island from April 20th – 23rd.  The film formed part of a larger project that evaluated crisis communication during the eruption. Residents were also involved in this portion of the project, providing researchers with feedback on the information they did or did not receive leading up to the eventual evacuation and eruption. Results from the evaluation will help to prepare local authorities and the UWI-SRC for future eruptions.

Behind the scenes filming for the communications evaluation project short film

A second project saw several Vincentians learn the art and science of photography while capturing changes in their environment. The Changing Landscapes SVG Community Recovery Project focused on documenting the changes caused by lahars (mudflows) in the aftermath of the eruption. Participants were mentored by local professional photographers and learned the basics of photography during workshops in October and November 2021.  Scientists from the UWI-SRC and the University of East Anglia also oversaw the installation of rain gauges on the volcano and surrounding communities that will allow villagers to keep track of rainfall and its effects.

An exhibition titled: Re-imagining the Red Zone will showcase participants’ photos at the National Trust Building, Kingstown from April 4th – 8th and then at Sion Hill, Sandy Bay from April 9th – 22nd. Project manager Ms Monique Johnson believes the citizen science approach taken in this project will encourage persons to be more aware of their surroundings and help residents understand the effect the volcano can have on daily life long after the eruption is over.

It is hoped that the project promotes a new means of knowledge production and can be a vehicle for community engagement for risk reduction and recovery. The UWI-SRC and The National Emergency Management Organisation (NEMO) cordially invite all Vincentians and visitors to take part in these commemorative events. 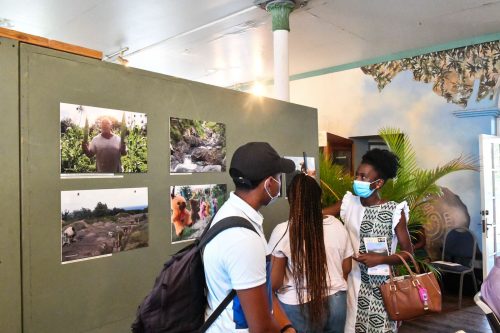 Participant in the changing landscapes project showcases her work at the launch of the exhibit.