Members of the engineering and scientific communities together with representatives from international funding agencies and other regional stakeholders convened at the Kapok Hotel in Port of Spain Trinidad to launch the Global Earthquake Model Caribbean Regional Programme which seeks to establish uniform and open standards for calculating and communicating earthquake risk worldwide. 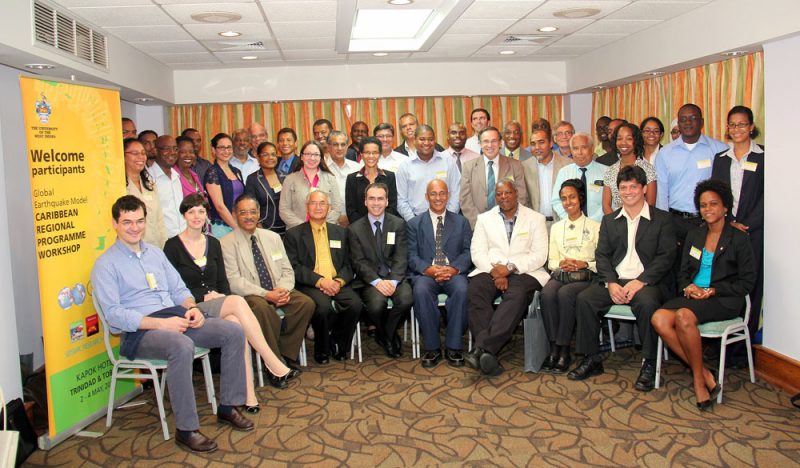 While the knowledge and expertise required for developing tools to calculate earthquake hazard and risk exists, the low occurrence of earthquakes in any one country or region renders it difficult to test the efficiency of these tools. Dr. Rui Pinho, Secretary General of the GEM Foundation noted that this was clearly illustrated in recent earthquakes in Japan and New Zealand where, despite advanced seismic risk assessment systems in those countries the models still did not cater for a correct estimation of the likely intensity of the earthquakes that occurred. “We urgently need a trans-national dialogue to discuss and vet our different ideas and approaches as only through such global testing will we learn what methods are superior and only through a shared standard set of tools will we be able to exchange ideas, results and approaches and ultimately mitigate seismic risk to which the world is exposed,” said Pinho.

Over the next three days, participants from across the region will be introduced to the GEM goals and discussions will be held to establish a strategy for achieving them. Through this interaction, it is hoped that gaps in existing knowledge in the Caribbean regarding earthquake hazard, vulnerability and earthquake risk can be identified and the necessary research prioritized in order to make full use of the GEM software and tools in the Caribbean region.

Minister of Science, Technology and Tertiary Education, Senator The Honourable Minister Fazal Karim, delivered the feature address at the opening ceremony during which he declared his support for the initiative given the Caribbean’s vulnerability to natural hazards such as earthquakes, which continue to undermine the region’s efforts to attain sustainable development. “We welcome the launching of this GEM Caribbean Regional Programme which will bring together all the key stakeholders in the region to develop a strategy for achieving GEM’s goals within the Caribbean,” stated Honourable Minister Karim.

Director of Business Development, UWI, Dr. David Rampersad, delivered welcome remarks on behalf of PVC Professor Clement Sankat, Campus Principal UWI St. Augustine Campus in which he emphasized the importance of strong partnerships such as the GEM/SRC relationship, among various stakeholders for advancing the cause of sustainable development initiatives.