The Seismic Research Unit have confirmed reports of a disturbance at sea, about five miles east of Radix Point on the east coast of Trinidad. This is probably caused by an underwater mud volcano, similar to that at Chatham Island and several on-shore mud volcanoes in Trinidad.

Staff of Repsol YPF, who regularly fly over the area, reported a “bubbling of the sea” and extensive brown discoloration of the sea water since about July 11. The location was given as 10 degrees 22.498 minutes N, 60 degrees 55.322 minutes W. 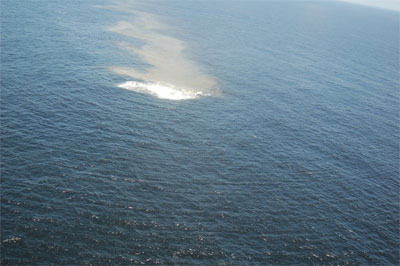 General view of the disturbance showing circular pattern of waves.

he discoloration was being carried to the north-northeast by the prevailing currents, disappearing completely at a range of about 100 metres (350 feet). 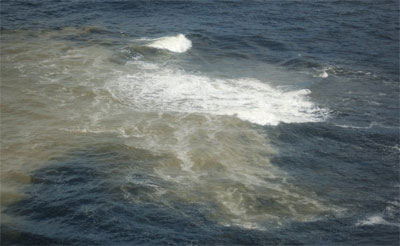 This view shows what appear to be distinct plumes of material beneath the water’s surface.

Close examination revealed a number of discrete brown plumes of material which appeared to be coming from shallow vents. These could be seen on the south and west margins of the disturbed area, although other sources might have been be obscured by the muddy water. 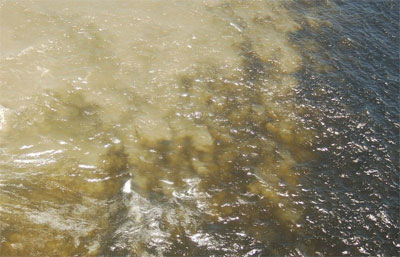 Close up of “plumes”.

SRU also received reports from people who were diving in the area about two months ago. They observed brown material coming from what appeared to be a single vent on the sea floor, about 15 metres (50 feet) below the surface.

Bathymetric charts, last updated in 1931, show water depths of about 15 metres (50 feet) in this area.

Section of Admiralty Chart 483B showing the location of the disturbance.

All the observations suggest the source is an underwater mud volcano. The extrusion of mud over a period of about two months appears to have built up a 15 metre (50 feet) high mount which is now just below the water surface. This is very similar to the activity at Chatham Island, which produced short-lived islands in 1964 and 2001.

It is not possible to say how long the activity will continue and whether it will result in the creation of an island like Chatham Island. The edifice is subject to much greater erosion nearer the sea surface, so may never break the surface.

The hazards generated by this activity are very localised. There is a real danger to any boats that approach the disturbed area and sailors are encouraged to adopt a cautious approach and stay more than one mile from the disturbance.