Government officials, community leaders and school teachers convened at the Montserrat Volcano Observatory (MVO) today as the Observatory revealed its new logo and public education plan for the next two years.

Although involved in education and outreach activities from its inception, the MVO Outreach Plan 2008-2010 marks the first time that the Observatory will deliver a comprehensive strategy for providing information on the Soufrière Hills Volcano.

Branded as the Living with our Volcano programme, the Outreach Plan promotes both safety and education. “In developing this programme, our primary focus was to ensure that residents would be educated on the hazards posed by the volcano and that they would understand how to live safely with it,” said Stacey Edwards of the UWI Seismic Research Centre, who co-authored the Plan with Guillaume Levieux of the IPGP. “However, it was also very important to us to include a component where Montserratians were encouraged to use the volcano as a learning opportunity,” added Edwards. 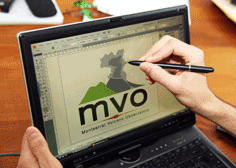 The results from surveys and meetings with stakeholders were used to identify target groups, develop messages and select communication tools for the programme. Highlights from the programme will include a refurbished MVO website, development of a SHV Educator’s Guide for schools and MVO Information Kiosks.

The MVO also launched its new logo to symbolize the Observatory’s evolution throughout its thirteen-year history. Designed by Levieux, the logo’s green illustrates the living part of the Emerald Isle while the gray represents the volcano and ash. “The ash plume reminds us that the volcano is active and the delta is an important part of the Montserratian landscape,” remarked Levieux. The red seismic signal symbolizes Science.
Edwards added, “This is an important day for the MVO and we look forward to partnering with our stakeholders to implement the Living with Our Volcano programme.”

Established in 1995, the Montserrat Volcano Observatory monitors the Soufrière Hills Volcano on Montserrat and provides the authorities with impartial advice on volcanic activity and associated hazards. The MVO is a statutory authority of the Government of Montserrat and it is jointly managed by the UWI Seismic Research Centre and the Institut de Physique du Globe de Paris. For further information visit www.mvo.ms