It Takes a Team

A baldhead, a Rasta and a rock star walk into a bar… sounds like the set up to a pretty good joke but in reality, these three formed the frontline of a formidable team when La Soufriere decided to blow its top. A teenager the last time La Soufriere erupted; the baldhead would become the face of this latest episode. The rasta, a native Montserratian displaced by another ‘Soufriere’ as a teenager himself, studies volcanic gases. The rock star, a keen Scot with an eye for earthquakes, would ultimately sound the warning that took thousands out of harm’s way. Geologist, Prof. Richard Robertson, gas specialist Dr. Thomas Christopher and volcano-seismologist Roderick Stewart are all part of the larger scientific team keeping an eye on La Soufriere in St. Vincent. 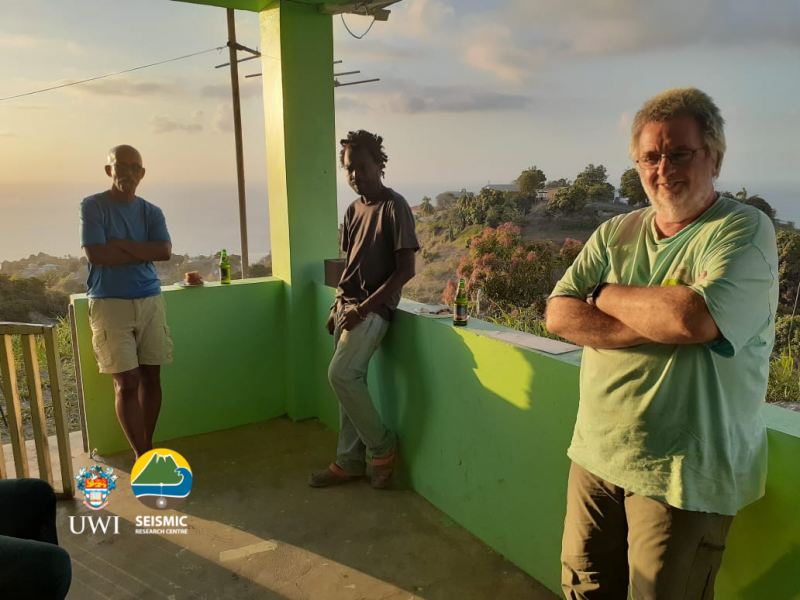 The UWI Seismic Research Centre (UWI-SRC) like many institutions in the region, predates the formation of the independent nations it now serves. In response to a series of volcanic crises in the 1930’s, The Volcanological Research Department was established in 1953 to provide a base for scientific response to eruptions in the British West Indies. Today the UWI-SRC monitors earthquakes and volcanoes in 9 English-speaking Eastern Caribbean territories. Our responsibilities split the team between the Montserrat Volcano Observatory and St. Augustine, Trinidad. Our scientists and technicians are a mix of homegrown talent and international flavour. Trinis, Vincies, Montserratians, and the occasional Jamaican all work alongside those with Kenyan, British, Greek, Chilean, Aussie and French passports.

We are a mixed bag of tricks or maybe a ‘pelau’ might be more appropriate (the author is hungry). Geologists, seismologists, geo-physicists, engineers, ICT professionals, administrators, technicians and science communicators all pitch in to make sense of nature at its more interesting turns. No man is an island, so it makes sense that our Director, Dr. Joseph, is a woman adept at rallying the troops. The days are often long; days when fear must take a back seat to duty, but these are days that you do not get through alone. We may not see them often, but any chance to link up with our Disaster Management friends ‘up the islands’ is always something to look forward to. So, whether it’s posting to the ‘gram’ or collecting rock samples, hiking to the Valley of Desolation (Dominica) or microzonation in Port of Spain (Trinidad), looking down a microscope or Tsunami week in Bim (Barbados)…. it takes a bloody good team!

Omari Graham is a PhD Volcanology student and Education & Outreach contributor at the UWI Seismic Research Centre. He combines his training in Physics with a love of communication to make science more accessible. Eight years of outreach experience throughout the Eastern Caribbean and natural comedic timing shine through in his workshops and training sessions