The Republic of Trinidad and Tobago

Tobago is the second most southerly island of the Lesser Antilles. Tobago is 30 km (19 mi) northeast of Trinidad and is 41 km (25.5 mi) in length and 12 km (7.5 mi) at its greatest width. It is mountainous and dominated by the Main Ridge, which is 29 km (18 mi) long with elevations up to 640 m. There are deep valleys to the north and south of the Ridge and the southwestern tip of the island has a coral platform. Tobago has a maritime tropical climate influenced by the northeast trade winds. Temperatures range between 20 °C- 34°C and there are two seasons: Dry (January-May) and Wet (June-December).

Tobago is part of the twin-island republic of Trinidad and Tobago. Residents are often referred to as ‘Tobagonians’. Approximately 60,874 people reside in Tobago mainly in and around the capital, Scarborough. English is the country’s official language. It is governed by the Tobago House of Assembly. The island is considered the quieter of the twin-island nation and is steeped in rich culture and traditions. Currency used: Trinidad and Tobago Dollar (TTD).

In the event of an earthquake or tsunami the Tobago Emergency Management Agency is the official authority in Tobago.

The Trinidad and Tobago area, as shown in the epicentral plot, is one of the more seismically active zones in the Eastern Caribbean, with an annual average output of about 260 earthquakes of magnitude greater than 2.0.  However, the activity rate is not uniform across the area.  The rate in the Tobago area has picked up since 1990 and whereas in the past the rate was on par with that seen on land Trinidad, it is now closer to that seen north of Trinidad.  Following are details of the significant magnitude events observed in the zones making up the area: 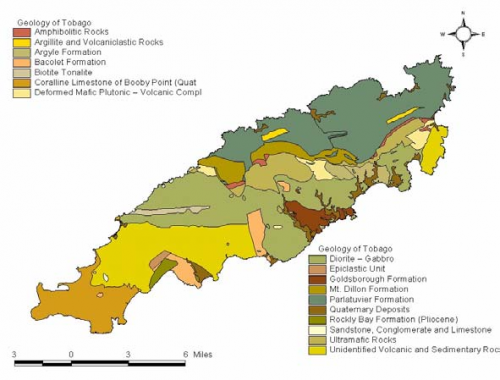 This low-grade metamorphic province outcrops in the northern third of the island. These are the island’s oldest rocks thought to be Lower Cretaceous in age. It is comprised of strongly deformed metavolcanic and metasedimentary rocks that experienced penetrative plastic deformation during greenschist facies metamorphism (Jackson and Donovan 1994).

This unit intrudes both the NCSG and the TVG, and forms a zone of contact metamorphism in those areas that have been unaffected by faulting. It consists of four distinct and mappable units: deformed and metamorphosed mafic rocks, ultramafic rocks, diorite-gabbro, and biotite tonalite (Jackson and Donovan 1994).

The NCSG, TVG and Plutonic Suite are all intruded by a swarm of fine-grained dykes which contain hornblende ± clinopyroxene and plagioclase (Jackson and Donovan 1994).

The Mesozoic basement rocks of Tobago are unconformably overlain by Neogene and Quaternary sedimentary rocks. This unit outcrops in the southwestern end of the island and comprises terrigenous and carbonate rocks (Jackson and Donovan 1994).

Seismicity
Written accounts of the effect of earthquakes in the Eastern Caribbean, which is now known to be significantly seismically active, begin with European settlement and date back to the sixteenth century. This information is summarised in Robson’s Earthquake Catalogue for the Eastern Caribbean 1530-1960 (Robson, 1964), where there are only two references to earthquakes felt in Tobago before 1958. The first report notes 1790 as a period with the comment “There were three earthquakes during this year”. The second reference is to the earthquake of 1825 September 20, which caused significant damage in Port of Spain, Trinidad, and was reported felt from British Guiana to Barbados. For Tobago, the report states “a shock causing no damage”, with which Robson (1964) associated a Modified Mercalli Intensity (MMI) of VI. The conclusion, therefore, is that Tobago remained minimally affected by earthquakes in the region for over four hundred years. Continuous instrumental monitoring of earthquakes in the Eastern Caribbean began in 1952 and since that time, three earthquake sequences have been recorded in the vicinity of Tobago. The first sequence occurred in 1958. Limited instrumentation, with the associated photographic recording system in use, produced a small number of phase arrivals that allowed hypocentral solutions for only seven of the events in that sequence (hyperlink). The activity occurred over the two-day period 1958/01/02 – 1958/01/04. At that time, the network had no station in Tobago and only one in Trinidad, TRN. Consequently, only the events of Mt ≥ 3.5 produced sufficient arrivals for solution. The main shock occurred on 1958/01/02 at 10:35:35.00 p.m., was located at 11.299°N 60.743°W 35 km depth, with a duration magnitude, Mt, of 4.5 (Latchman, 1998). It was felt at MMI VI (hyperlink) in Tobago (Robson, 1964). The epicentre was west of Tobago, and north of the aftershock activity, which occurred along a south-east – north-west trending line. The aftershock activity was generally shallow, about 10km. The other felt events were at MMI II (hyperlink) (Robson, 1964). The second sequence occurred in 1982 and as described by Morgan et al. (1988) (hyperlink) started very slowly, then intensified, and built to a climax with the occurrence of an mb = 5.2 (NEIC) event on 1982/09/20 at 12:26:42.03 p.m., decaying to background seismicity over a seven-month period. There were over 1,000 events of magnitude > 1.5 recorded. By 1982, there was a station, in the active area, in Tobago. However, only 27 of the bigger events were suitable for accurate location. This activity was well confined to a relatively narrow lineament traced out by the epicentres, with the main shock defining one end of the line. The third series began, fifteen years later, without identifiable foreshock activity, with the occurrence of an Mt = 5.6 event on 1997/04/02 at 02:14 a.m and climaxed with an Mt=6.1, main shock that followed on 1997/04/22 at 05:31:21.64 a.m. It produced the largest magnitude events to have occurred near Tobago since instrumental monitoring began. Significant damage (hyperlink) also occurred. The nature of the 1997 activity is very similar to that of 1958 in that both the west of Tobago and south-west Tobago zones exhibited activity. It differed in that the mainshock in the activity south of Tobago was stronger than that west of Tobago. Some aspects of Tobago seismogenisis revealed by the 1997 activity have been explored in one of the Centre’s research projects. Apart from those periods when there is sequence activity, background seismicity in the vicinity of Tobago is relatively low when compared with other zones in the Eastern Caribbean.
Bibliography

Jackson, T A, and S K Donovan. 1994. “Tobago.” In Caribbean Geology: An Introduction, edited by S K Donovan and T A Jackson, 193-208. Kingston: The University of the West Indies Publishers’ Association (UWIPA).