Barbados lies in the Northern Atlantic Ocean and is the easternmost island in the Lesser Antilles. Its closest neighbours are St. Vincent and the Grenadines 100 km to the west and Trinidad and Tobago 400 km to the south-west. The island is relatively flat compared to its volcanic neighbors and its pear shaped landmass is bounded by 97 km of coastline. Barbados runs 34 km from north to south and is 23 km across at its broadest point. Barbados’ climate can be described as moderately tropical, with the island having a wet or rainy season which runs from June to November and a dry season from December to May. Annual rainfall ranges between 1,000 and 2,300 mm and year round maximum day time temperatures average 30°C. Unlike most of the adjacent islands Barbados has no volcanoes.

Citizens are referred to as Barbadian or Bajan (colloquially). English is the official language with Barbadian creole also spoken. Tourism is the country’s largest sector. Currency used: Barbadian Dollar (BBD).

In the event of an earthquake or tsunami the Barbados Department of Emergency Management is the official authority in Barbados. 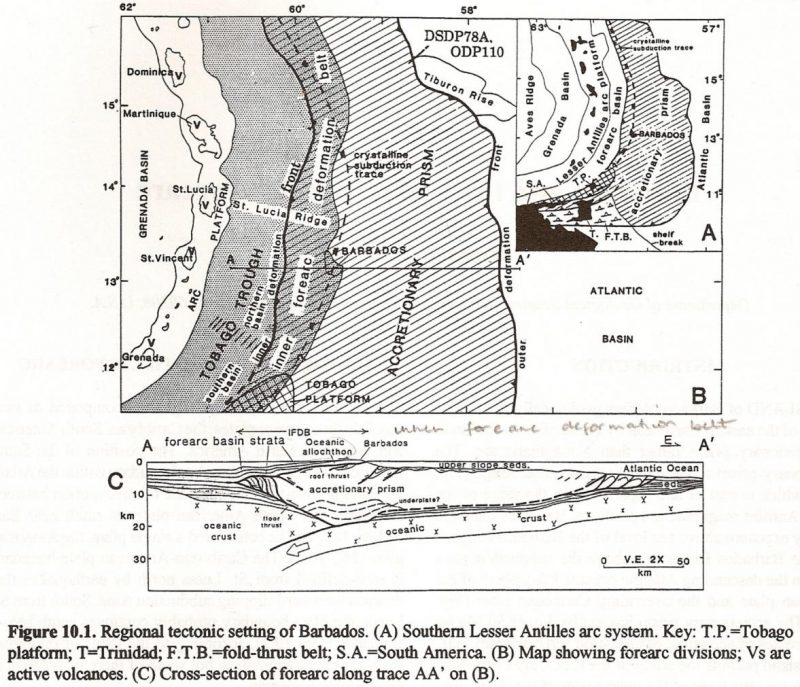 Tectonic Setting of Barbados from Speed (1994)

Barbados differs geologically from other islands of the Eastern Caribbean by virtue of its evolution in an accretionary prism rather than a magmatic arc(Speed 1994). During the subduction process which allowed the formation of this volcanic ocean island arc, sedimentary material was scraped off the descending North American plate and piled up on the edge of the overriding Caribbean plate. The accretionary prism formed is east of and separate from the ridge of the Lesser Antilles magmatic arc platform. Barbados is the only exposure in this region and one of the few places in the world where an active accretionary prism is exposed above sea level.

With the exception of some volcanic ash bands, the rock succession in Barbados is entirely sedimentary in origin, demonstrating its geological independence from the volcanic arc of the Lesser Antilles (Donovan 2005. Pleistocene reef limestones make up 85% of the exposed rocks. The remaining 15% are Tertiary sedimentary rocks of marine origin which crop out in a triangular region in northeast Barbados called the Scotland District (Donovan 2005) 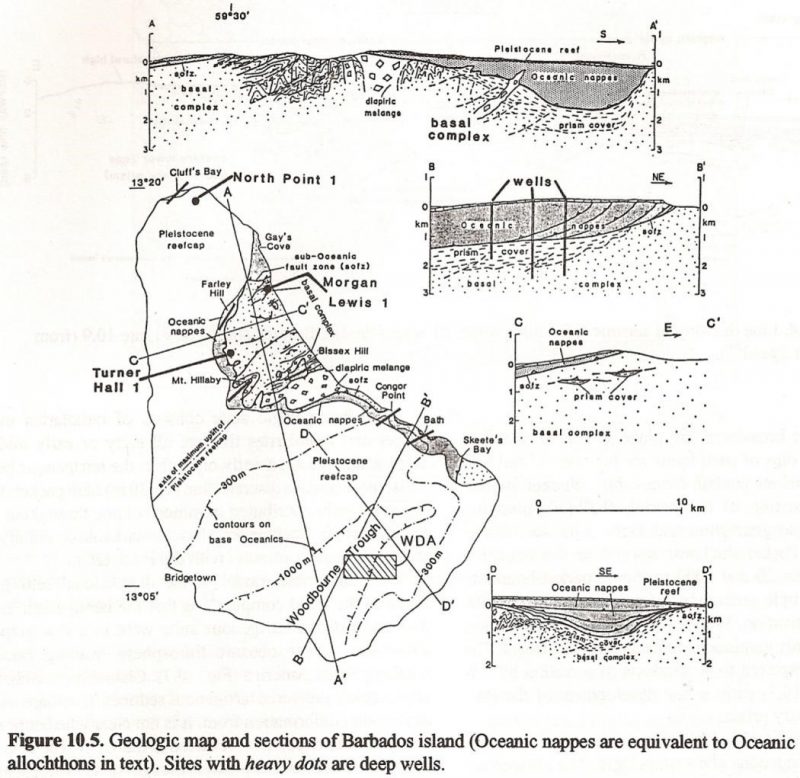 Geological Map and sections of Barbados from Speed (1994)

This unit consists of deformed, Eocene-aged, deep-water siliciclastic sedimentary rocks of turbiditic origin and hemipelagic, radiolarian-rich clays, together reaching a thickness of at least 4.5 km. It probably formed during the earliest years of prism history.

This unit consists of Oceanic Nappes thrust above the basal complex and prism cover. These are Eocene to Miocene strata as thick as 1.5 km.

This unit consists of a mud-supported melange thought to have originated in the basal complex and later emplaced through the prism cover and along the base and within the Oceanic allochthon.

These tectonostratigraphic units are overlain by an autochthonous Pleistocene coral reef cap (30-120 m thick) which records the emergence of the island during glacio-eustatic oscillations of sea level. The rise of Barbados as an island, beginning before about 650 ka, is anomalous with respect to regional submergence of the structural high in the late Neogene and is thought to be due mainly to local diapirism(Speed 1994.

Earthquakes are relatively infrequent occurrences in Barbados, although they have occurred in the past, most recently in July 2015 when the island experienced a period of elevated seismic activity. There are more than 500 earthquakes in the defined Barbados seismic zone. An average of 13 earthquakes greater than magnitude 2.5 occur in this area each year.  This is relatively low in comparison with areas in the northern Leewards  – near Antigua – and Trinidad and Tobago.

Barbados has been impacted by at least four tsunamis in recorded history:

Barbados rises in the Atlantic Ocean about 200 km east of the islands of the Lesser Antilles island arc. It is the surface expression of the accretionary prism, which is a feature of subduction zones. In the area defined as the Barbados zone, shown in the epicentral map, seismicity is generally at a lower rate than that seen along the arc, north of Saint Lucia (see plots of annual magnitude distribution and daily and cumulative counts since 2000).

In general, only the larger magnitude earthquakes along the arc generate shaking that can be felt in Barbados and fewer still cause damage. However, on 2015/07/16, there was an unusual earthquake sequence located more than 200 km east of the arc and about 100 km north-east of Barbados. A foreshock of magnitude 6.3 started the sequence, with the main shock, at magnitude 6.6, following about four hours later. There were hundreds of earthquakes in the sequence, which continues with episodic events in the area. Prior to that, on 2013/02/18, there was a magnitude 6.3 earthquake located even further north of Barbados that was also strongly felt in Barbados. These recent strong earthquakes occurring a little further east of the arc and being strongly felt in Barbados have helped to reinforce the fact that all islands in the Eastern Caribbean, including Barbados, are vulnerable to the damaging effects of earthquakes. The magnitude distribution of the earthquakes in the zone to date suggest a deficit of events in the magnitude range 4.6-6.5 and the occurrence of such events over time or associated with sequences from strong-major earthquakes would be consistent with observations in this zone.

Besides the known earthquakes along the arc, there exists a seismicity gap in the segment north of Grenada and south of Saint Lucia, which may be indicative of aseismic movement or a locked segment. If the latter is the reality, then there may be potential for a major earthquake within this gap. Evidence for this may be found in the historical accounts, where there are reports of an earthquake occurring on 1834/11/25 causing a considerable amount of minor damage in St. Vincent. Maximum intensity associated was MMI VIII. While no intensity for this event is quoted for Barbados in Robson’s 1964 catalogue, the 1953/03/19 magnitude 7.7 event, which occurred off the north-west coast of Saint Lucia produced MMI VII in Bridgetown, Barbados with many buildings being seriously damaged. The 2007 magnitude 7.3 north of Martinique earthquake was also damaging in Barbados at MI VII, but at a much lower scale than that of 1953.

An earthquake of magnitude larger than those described above in the same general locations have the potential to produce a maximum intensity in Barbados higher than that observed from the 1953/03/19 and 2007/11/29 events, possibly with a higher level of damage impact.

Speed, R C. 1994. “Barbados and the Lesser Antilles Forearc.” In Caribbean Geology: An Introduction edited by S K Donovan and T A Jackson. Jamaica: The University of the West Indies Publishers’ Association (UWIPA).