Antigua, the largest of the English-speaking Leeward Islands, is about 23 km long and 18 km wide, encompassing 280 square kilometres. Its highest point is Mount Obama (402 m), formerly known as Boggy Peak, located in the southwestern corner of the island. Barbuda, a flat coral island with an area of only 176 square kilometres, lies approximately 48 km due north. The nation also includes the tiny (1.6 square kilometre) uninhabited island of Redonda, now a nature preserve. Antigua has a deeply indented shoreline with many natural harbours and beaches and Barbuda has a large western harbour. Temperatures generally range from 20°C to 35°C. Annual rainfall averages only 1,140 mm, making it the sunniest of the Eastern Caribbean Islands, and the northeast trade winds are nearly constant.

Approximately 99,175 people live on both islands. People are referred to as Antiguan or Barbudan. English is the official language with Antiguan creole also spoken. Currency used: Eastern Caribbean Dollar (ECD) and US Dollar.

In the event of an earthquake or tsunami the National Office of Disaster Services is the official authority in Antigua & Barbuda.

The Leeward Islands area is the most seismically active zone in the Eastern Caribbean and has hosted the largest magnitude earthquakes to have occurred in the region since the 1600’s, when written accounts for the region began. The average number of background earthquakes, i.e. those that recur on a daily/weekly basis, does not change drastically. The output level sometimes increases in association with the occurrence of a significant magnitude earthquake. This can take the form of foreshocks and aftershocks or only aftershocks. Since 2011, activity in the area has been generally elevated over that seen in previous years. Elevated activity is sometimes precursory to more significant magnitude earthquakes.

Antigua and Barbuda are constituent islands of the Limestone Caribbees. Bifurcation of the Lesser Antilles north of Guadeloupe took place between 7 and 20 Mya(Nagle and Stipp 1976) where the locus of this region’s volcanism shifted from east to west. The presence of an inner and outer island arc symbolizes this movement and these are known collectively as the Volcanic Caribbees and Limestone Caribbees respectively (Martin-Kaye 1969). 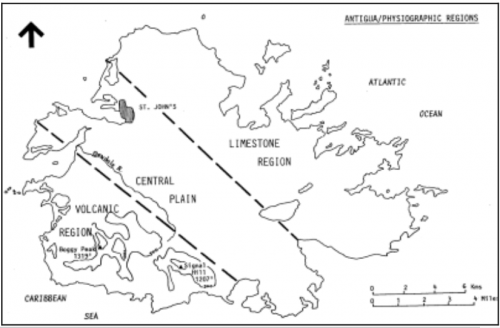 This volcanic region takes up the southwest 40% of the island. It is the oldest unit (Eocene-Oligocene) comprising basalt, andesite with some outcrops of dacite in the eastern portion and thick accumulations of pyroclastic debris (The Technical Advisory Committee 2005).

This unit overlies the Basal Volcanic Suite and comprises sedimentary rocks such as mudstones, tuffs, arenites, conglomerates and some limestone. These sediments form a complex patchwork of facies deposited in terrestrial to shallow marine settings as volcanism waned (Johnson 2007). Fully marine conditions were more or less established by the top of the Central Plain Group and carbonate sedimentation became dominant resulting in the deposition of the Antigua Formation.

The northern third of the island consists of limestone formations. They are geologically the most recent (Oligocene) and are composed of mostly fossiliferous marine limestones and marls with coral limestones and a few lenses of interbedded, weathered and volcanic gravel (Powers, Ervin, and Weiss 1987).

Barbuda is geologically connected to Antigua but they are separated by a shallow area of sea due to sea level rise at the end of the last ice-age around 10,000 years ago (The Technical Advisory Committee 2005). No volcanic rocks are exposed on Barbuda (Wadge 1994), but instead consists solely of sedimentary (mainly carbonate) rocks.The oldest rocks on the island (Middle Miocene) are limestones of the Highlands Formation. This is overlain by the Codrington Formation, consisting of sandy and fossiliferous sediments less crystalline than the Highland limestone. The Holocene Palmetto Point Formation is comprised of beach sands and ridges, with shelly horizons (The Technical Advisory Committee 2005).

The Leeward Islands area, as shown in the epicentral plot, is the most seismically active zone in the Eastern Caribbean and has hosted the largest magnitude earthquakes to have occurred in the region since the 1600’s, when written accounts for the region began. The average number of background earthquakes, i.e. those that recur on a daily/weekly basis, manifest minor fluctuations. The output level sometimes increases in association with the occurrence of a significant magnitude earthquake. This can take the form of foreshocks and aftershocks or only aftershocks.

One such period in 2000-2001 exhibited elevated earthquake activity associated with a magnitude 5.6 event on 2000/10/30 that was located east of Barbuda. However, since 2011, activity in the area has been generally elevated over that seen in previous years. Elevated activity is sometimes precursory to more significant magnitude earthquakes. In the epicentral plot shown for the period since 2011, the moderate to strong earthquakes are labelled. Whether or not the elevation being observed is associated with those events or indicative of a more significant magnitude event to come, only time will tell. It may be worthy of note that on 2011/09/06, there was an earthquake of magnitude 5.6 located at 21.66°N and 60.20°W, which is an unusual area for earthquakes to occur and significantly extends the area of increased activity.

During the instrumental era, since 1953, there have been a number of strong to major earthquakes in the area. On 1974/10/08, there was a magnitude 7.4 earthquake located north-east of Antigua/south-west of Barbuda causing damage at Modified Mercalli Intensity VIII in Antigua and lower intensities in the more distant islands. The damage was confined mainly to larger and older buildings, to a petroleum refinery, and to a deep-water harbour. A few people received minor injuries, but no fatality was reported. Then on 1985/03/16, there was a magnitude 6.3 event located west of Antigua/south-east of Nevis that was strongly felt in Montserrat, Nevis, Antigua and St. Kitts.

During the historical era, which dates back to the 16th Century, the first major earthquake in the area, for which there are written accounts, is estimated to have been located close to Nevis and occurred on 1690/04/05. The damage accounts in Robson (1964) suggest impact at Modified Mercalli Intensity IX: In Antigua, some buildings collapsed into rubble, with some associated deaths. Governor Codrington, the then Governor, lost property with value estimated at £2,000. Aftershocks were felt almost daily for a month.

The region’s great earthquake, at magnitude estimated to be in the range 8.0-8.5, was also located in this area, south-east of Antigua, on 1843/02/08. In this instance also, the maximum intensity, based on damage accounts, has been put at Modified Mercalli Intensity IX. In St. Johns, Antigua and across the island generally all masonry structures were destroyed or severely damaged. Many houses were left with their outer masonry walls collapsed and the inner walls supporting the roof. Wooden houses remained standing. Alluvial ground was fissured and sulphurous water thrown out. Landslides were general on hill slopes. At English Harbour the wharf, built on reclaimed ground, sank and afterwards had an undulating appearance ‘like waves on the sea’. A cloud of dust hung over the island for some minutes after the earthquake. After the earthquake the sea rose four feet, but sank again immediately, remaining calm throughout. The number killed was variously estimated in the range 12-40. The damage at English Harbour was variously estimated at £20,000-£25,000. The total damage in Antigua including the loss of the sugar crop was estimated at £2,000,000.