We have been notified that guides and visitors to the Boiling Lake in Dominica have recently reported an unusually strong smell of sulphur coming from the Lake, which is currently a murky black color. The Boiling Lake has been known to undergo changes in the past, and its water level has even dropped drastically on occasion. These past incidents appear to have reflected local changes in the geothermal system, and were not related to an increase in volcanic activity. The current changes in activity may be associated with the unusually hot and dry season that we are currently experiencing in the Caribbean. Possible causes for the changes in the lake are outlined below:

The water level in the lake has dropped with or without an increase in gas emissions at the bottom of the lake. This could result in either or both of the following: The churning up of the lake bottom sediments by the gases being emitted at the lake bottom. Hence the murky black color of the lake and the sulphur smells. An increase in lake water temperature resulting in increased activity of sulphur oxidizing bacteria inhabiting the lake. Such bacteria are responsible for producing larger amounts of iron monosulphide (FeS), a black particular solid that would make the color of the lake appear black. This is common in many geothermal areas, including the Valley of Desolation (see photo). There is an increase in dissolved metal ions (e.g. Fe3+, Fe2+) in the lake water due to increased gas emissions at the bottom of the lake. This has resulted in an increased production of iron monosulphide (FeS) in the lake. Landslide material being washed into the lake has led to some changes in its appearance. It is believed that the changes in the lake appearance and smell may actually be due to a combination of the scenarios described above. We believe that these changes are NOT related in any way to the swarm of shallow earthquakes that has been occurring over the past several days in the north of Dominica.

Within the next few weeks staff from the Seismic Research Unit will be making a routine visit to Dominica to carry out regular monitoring of the geothermal areas (soufrière). At that time we will be able to release more information about the phenomena discussed here. In the meantime, if anyone notices any further changes in Dominica’s geothermal areas, they should contact the Seismic Research Unit (uwiseismic@uwiseismic.com). 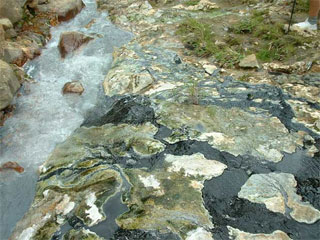 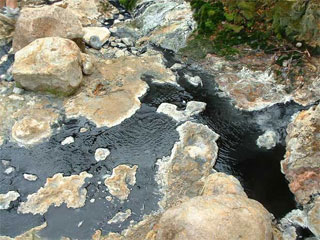 Black waters in the Valley of Desolation on the trail leading to the Boiling Lake. Such black waters are caused by the presence of iron monosulphide (FeS) and are common in many geothermal areas. (Photos courtesy Challie Minton, Dominica)