The Seismic Research Unit has been notified by Forestry Officers of the Forestry & Wildlife Division of Dominica that the water level and geothermal activity of the Boiling Lake, Dominica have significantly decreased. On December 28th a team of Officers were sent to investigate the situation and were able to verify that the water levels in the Lake had dropped by approximately 30 – 40ft. In addition there was no vigorous boiling or steaming, and the lake’s temperature was much lower than as is usually observed. The Boiling Lake has been known to undergo changes in the past, and a reduction in water level has been observed on four previous occasions: April-May 1988, April 1971, January 1901, and December 1900. The historical record as well as the present day volcano monitoring network indicate that these past incidents reflected local changes in the geothermal system, and were not related to any changes in the level of volcanic activity. Similarly the recent changes in activity may have resulted from changes in permeability of the rock materials beneath the Boiling Lake along with blockage of fumarolic vents in the crater. An increase in permeability of the subsurface layers would enable the crater waters to drain away faster than they are being replenished by the two surface streams. Blockage of the fumarolic vents would lead to a reduction in steam emission and hence in the temperature of the crater water. Given the recurrent nature of the recent changes at the Boiling Lake, scientists at the Seismic Research Unit will undertake an investigation so as to better understand the causes.

Despite the fact that it is unrelated to any increase in volcanic activity the recent changes at the Boiling Lake does increase the potential hazards to visitors to the area. In 1901 a small steam and gas explosion from the Boiling Lake (which was almost empty at the time) released harmful gases (probably mainly carbon dioxide) into the atmosphere and killed two people who were at the water’s edge at the time. This event highlights one of the main potential dangers of the Boiling Lake, especially at times of unusual activity. For this reason, we recommend that people exercise extreme caution when visiting the Lake in its current state. Specifically we recommend that:

1) No one climbs down to the water’s edge at this time, and

2) Visitors to the Valley of Desolation either avoid approaching the Lake and/or spend as little time as possible at the viewing point on the crater rim. 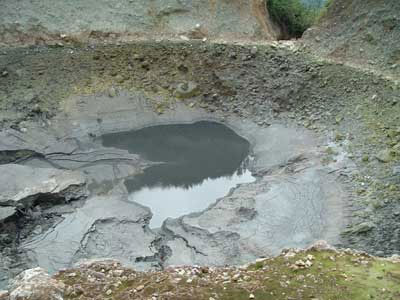 In the meantime, if anyone notices any further changes in Dominica’s geothermal areas, they should contact the Seismic Research Unit at uwiseismic@uwiseismic.com.