St. Augustine, Trinidad & Tobago – Friday December 10th, 2021 Observations made by a field team of officers from Dominica’s Office of Disaster Management (ODM), Forestry, Wildlife & Parks Division and Fire Services Division on a visit to the Boiling Lake on 1 December, indicated that water levels at the Boiling Lake have decreased since the previous visit made on 22 November. On 1 December, the lake was reported to be ~15m below its normal water level.

Further observations made by a local tour guide on 7 December, indicated that there was a further decrease in the water levels, slightly lower than was first observed on 18 November. 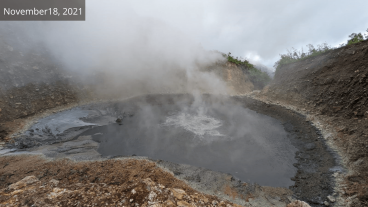 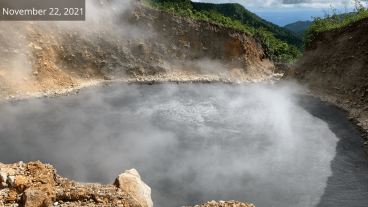 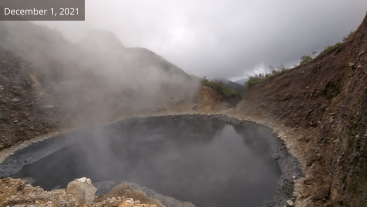 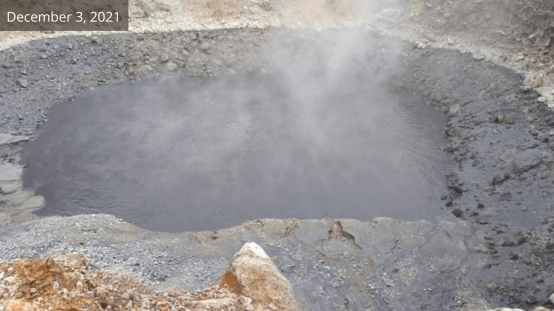 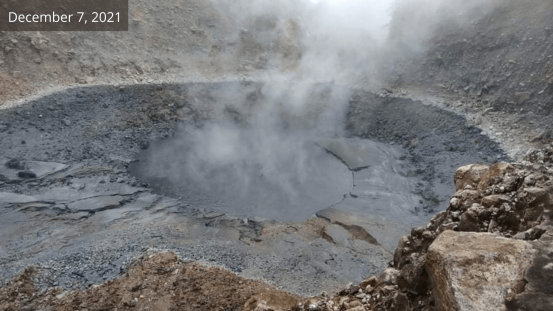 Based on scientific knowledge of how the lake behaves, these fluctuations occur when vents beneath the lake are blocked. This limits the flow of gas and water into the lake and when vents are unblocked the flow resumes. Water levels may therefore fluctuate before returning to normal.

The observed changes in water levels and activity at the Boiling Lake have previously occurred and are not necessarily related to increased volcanic activity in the area. Historically, these periods of instability can last for weeks to months before normal activity is fully re-established. During these episodes harmful gases such as Carbon Dioxide, can be released and small steam explosions may also occur. People should, therefore, minimise time spent visiting the immediate area at the Boiling Lake until the activity has subsided.

The UWI-SRC and Dominica’s Office of Disaster Management (ODM) with support from the Forestry, Wildlife & Parks Division, are continuing to monitor the situation and will provide updates.

Scientific updates on the volcano will be available on The UWI-SRC website and social media platforms (@uwiseismic).

St. Augustine, Trinidad & Tobago – Saturday November 20, 2021 – Water levels at the Boiling Lake, Dominica, have changed significantly in recent days, a phenomenon that has occurred several times since 1876. A local tour guide visiting the Boiling Lake on 18 November, first reported unusual activity and water levels at the lake. Scientists of The UWI Seismic Research Centre (SRC), who are currently conducting field work in Dominica, will visit the lake on Monday 22 November to make further observations and measurements, if possible. They will be accompanied by staff of the Forestry, Wildlife & Parks Division.

The Boiling Lake is a volcano-hydrothermal feature located in an area next to the Valley of Desolation in southern Dominica.  The lake levels have dropped dramatically and been restored at least eight (8) times in the past. The last draining episode occurred on 8 November, 2016 with the lake returning to its normal state by 10 January, 2017. 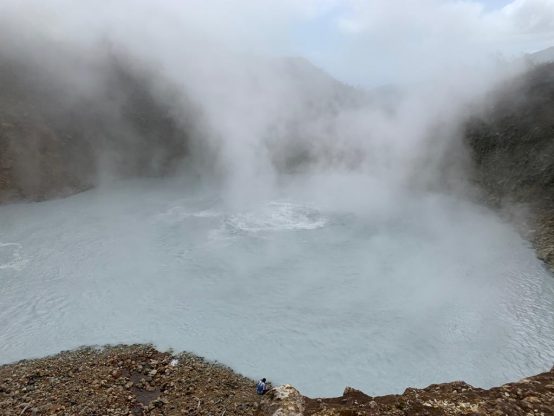 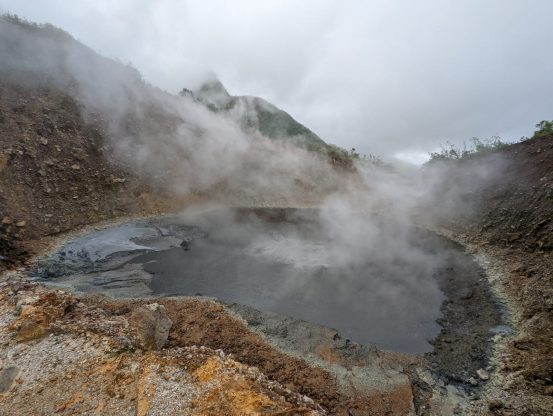 The historical record, as well as the present day volcano-monitoring network, suggests that the past episodes reflected local changes in the volcano-hydrothermal system. The observed changes in water levels and activity at the Boiling Lake are not necessarily related to increased volcanic activity in the area. However, during these episodes harmful gases, such as Carbon Dioxide, can be released and small steam explosions may also occur. People should, therefore, avoid visiting the immediate area until the activity has subsided.

The UWI-SRC monitors the Boiling Lake as part of its volcano monitoring programme in Dominica and updates the Office of Disaster Management (ODM) when significant changes are observed.

Updates on activity at the Boiling Lake in Dominica are available via The University of the West Indies Seismic Research Centre (UWI-SRC) website and social media platforms on Facebook and Twitter (@uwiseismic).

Advisories have been discontinued as the eruption has ended. See Advisory archive below

St. Augustine, Trinidad & Tobago – Thursday, October 14, 2021 — Scientists from the leading Eastern Caribbean agency for volcano monitoring will continue to operate the Montserrat Volcano Observatory (MVO) after an interim two-year contract for management of the observatory has been agreed to between the Government of Montserrat and The UWI Seismic Research Centre (UWI-SRC).

The management contract is set to run until September 2023.This interim contract represents the continuation of a longstanding relationship with the government and people of Montserrat. The UWI-SRC monitored the Soufrière Hills Volcano (SHV) prior to the start of the eruption in 1995. The agency also provided scientific support during the early stages of the eruption, before oversight of the management of the observatory transitioned to the British Geological Survey up until 2008. Since then, the MVO has been continuously managed by the UWI-SRC, including during its last major activity in 2010. Montserrat is also one of the UWI-SRC’s nine contributing territories. 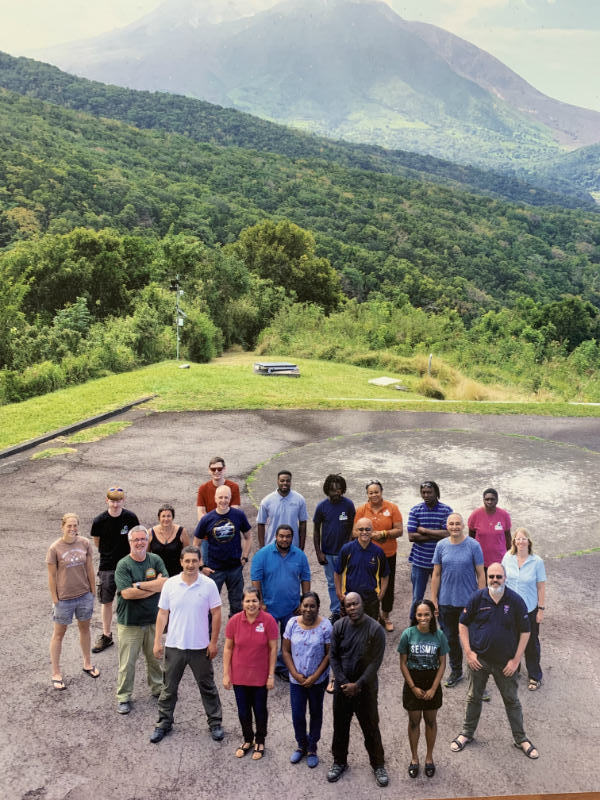 Staff and visitors at the Montserrat Volcano Observatory

Governor – and Joint Chair of the Montserrat Volcano Observatory Board – Andy Pearce was pleased at the news saying: “I, and the rest of the Montserrat Volcano Observatory Board, are pleased to have this contract in place ensuring  continuity in the vital function of monitoring our still active volcano. The dedicated, professional experts at the MVO are critical to the disaster preparedness of our island, as the recent eruptions in Saint Vincent and La Palma have shown. The MVO operation is at the leading edge of this area of science and has supported our neighbours in Saint Vincent during that eruption. We look forward to continuing to work with the MVO and the UK-government funded Scientific Advisory Council in the coming two years.”

The opportunity to serve the people of Montserrat and conduct scientific research on the “Emerald Isle” is a privilege not lost on UWI-SRC/MVO scientists and technicians. Dr. Erouscilla Joseph, Director at the UWI-SRC noted that “We are pleased to be given the opportunity to continue to build on the progress made at the MVO since 2008. The valuable contribution to the region made by the MVO was evidenced during the recent eruption of La Soufrière volcano in Saint Vincent, where MVO scientists made a significant contribution to management of the crisis.”

Under the contract, six UWI-SRC scientists are based full-time in Montserrat with UWI-SRC Volcanologist Dr. Graham Ryan, at the helm as MVO Director in charge of the day to day running of the observatory. He hopes that the partnerships formed with local and international colleagues will continue to bear fruit.

This latest vote of confidence in the UWI-SRC’s capacity to operate this regional centre for geo-science research is well appreciated. The UWI-SRC remains committed to providing quality service to those impacted by the Soufrière Hills Volcano.