November 29th marks the first anniversary of what is now known as the 2007 Martinique Earthquake. On Thursday 29th November, 2007 people of the Eastern Caribbean were reminded of the region’s vulnerability to earthquakes when a magnitude 7.3 event occurred north of Martinique at 3:00p.m. local time. This was the fifth earthquake of similar size to occur in this area since 1727 and the largest earthquake recorded since the magnitude 7.5 event which occurred in 1974 near Antigua.

Map showing earthquake epicentreThe Martinique Earthquake was perhaps the most widely felt earthquake in recent memory. Felt reports were received as far west as Puerto Rico and as far south as Guyana. As of August 28th, 2008 thirty-one (31) aftershocks have been located with the strongest occuring on December 5th, 2007 (M5.1). The Martinique Earthquake generated far less aftershocks than other
smaller earthquakes because it occurred
at significant depth (121km).

The Eastern Caribbean will continue to experience earthquakes in the future and as such citizens are encouraged to learn about earthquake safety measures and practice these through regular drills at home, school and work. 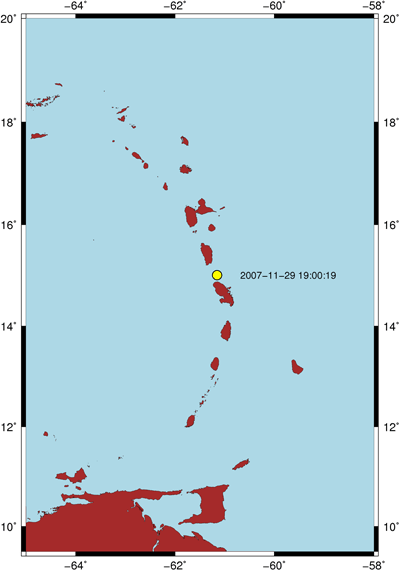 What is the difference between magnitude and intensity?
Magnitude is used to describe the energy generated by an earthquake. It is a fixed number that does not vary regardless of which island you are located. The magnitude of the Martinique Earthquake was 7.3.

Intensity scales attempt to describe the severity of an earthquake at a given location by describing the effects on people, structures and geological formations (e.g. whether or not buildings were damaged, whether items fell from shelves etc.) Each degree of intensity is described by a Roman numeral, (I, II, III etc.) the largest being XII, and the effects of the earthquake roughly double in severity for each one-division increase in intensity. The intensity of an earthquake varies depending on where you are in relation to the earthquake’s epicenter. For example, the intensity of the Martinique Earthquake was roughly V in Trinidad and at least VI in Martinique. 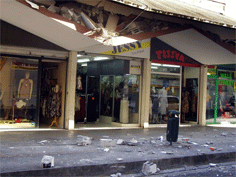 How can I protect myself during an earthquake?
The most important thing to do during an earthquake is to stay calm. If inside, stay inside and duck, cover and hold on to a strong table or stand in a doorway. Avoid windows and mirrors. Do not run outside as you may be injured by falling objects. After the earthquake, check for structural damage or broken gas lines and do not light matches. Further information on earthquake safety may be found at www.uwiseismic.com.