Home / La Soufriere 2021 / A Birthday Party Like No Other

As if to commemorate the anniversary of the 1979 eruption, Tuesday 13th April 2021 began with another explosive episode at La Soufrière. The mountain reminded us that this eruption was still in full swing with a mighty puff at 6:30am on Tuesday. Though this episode was less vigorous than the one that preceded it on Monday, it still generated an impressive sight. The explosion was announced by an increase in long-period earthquakes that gave way to seismic tremor during venting. 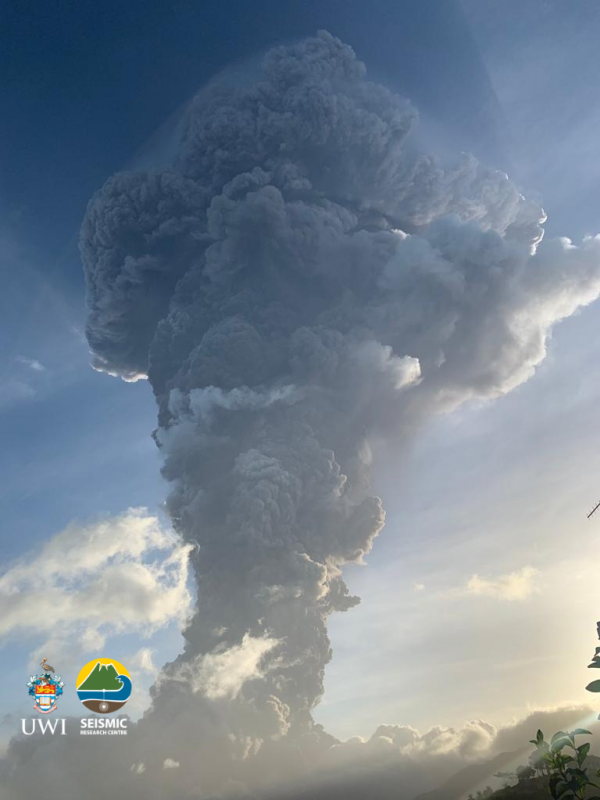 On Monday April 12th, following an overnight burst of tremor, La Soufrière delivered its largest explosion since a break in near continuous ash venting that started on Saturday evening. Monday’s predawn explosion generated pyroclastic flows (super-heated avalanches of ash, gas and debris), a first for this eruption. This was confirmed by Prof. Robertson and Dr. Christopher during an afternoon observation mission facilitated by the St. Vincent and the Grenadines Coast Guard. The Larakai Valley is fed by the lowest point at the summit and brought material all the way to the sea. Further south on the Leeward coast the village of Fitz Hughes was a picture of gloom. The village seemed to bear the brunt of the heavy ashfall experienced by those communities closest to the volcano. The windward coast would reveal much of the same. Owia, Fancy and Sandy Bay, though severely impacted by the ash, remained untouched by the dangerous pyroclastic flows.

Most of Sunday was dedicated to documenting the large amounts of ash deposited across St. Vincent since the Saturday. Barbados also experienced heavy ashfall on Sunday. Day turned to night as ash blanketed the non-volcanic island east of St. Vincent. Though sea-level winds generally move east to west in the southern Lesser Antilles, winds in the upper-atmosphere travel west to east and took the ash to Barbados. During the explosive phase of the eruption, residents of St. Vincent and neighbouring islands – Barbados, Saint Lucia, Grenada – can expect more ash events like these and must be prepared to cope with their effects.

Omari Graham is a PhD Volcanology student and Education & Outreach contributor at the UWI Seismic Research Centre. He combines his training in Physics with a love of communication to make science more accessible. Eight years of outreach experience throughout the Eastern Caribbean and natural comedic timing shine through in his workshops and training sessions.